By Tom Demerly for tomdemerly.com. 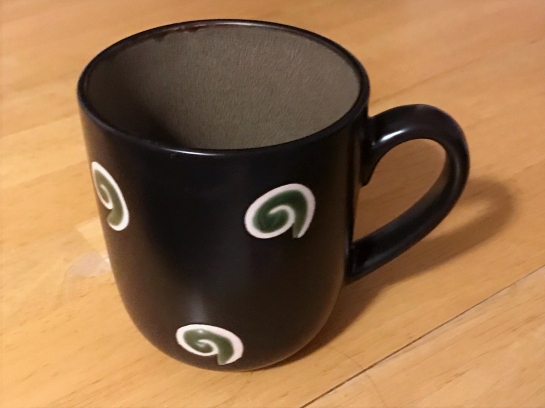 I was once so poor, I didn’t have a coffee cup.

It didn’t matter much since I had neither coffee or a coffee maker. I had boxes of things I owned when I was rich, before I lost everything. But I wasn’t going to stay in one place long enough to unpack them, so what was left stayed in the boxes. I never unpacked. Nothing was permanent.

No coffee cup though.

My parents told stories of the depression when they were kids. The stories didn’t seem possible to me. When I didn’t have a coffee cup it occurred to me, “Well damn. Here is our depression. Exactly like my mom described.” Now you’re reading my story of not having a coffee cup.

Eventually things began to improve. I was good at what I did, a writer. Got a good job writing at a company in California. Money came in. California is expensive so you need to earn a lot of money to be even reasonably comfortable. You still won’t have any money left over, so you better keep your job or find a new one outside California. If you want to make any money, don’t move to California.

Moved from California to Michigan. Brought my two cats in a cat carrier on the plane. I had written a letter to the airline well in advance telling them my cats were the most valuable thing in the world to me. They met me at the airport and took extra care of me and my two cats on the flight from California back to Michigan. I was thankful for that. Nothing was more important. I figured if I couldn’t even care for two cats, I was pretty worthless. But in this case, with the help of the airlines, I managed fairly well. Thank God, and I’m not even religious. The airline was Southwest airlines. If you can, when you fly, fly on Southwest Airlines. They actually care about people. And cats. That’s rare these days.

Still no coffee cup though.

When I got back to Michigan I took back an old job that I liked but didn’t earn much money. I was going to help open a new business soon. There was, at least, the promise of improvement if not tangible improvement itself. Sometimes you can do pretty good on just the promise of things getting better. It’s better than knowing things are going to get worse. I’ve gotten good at sensing when that is going to happen. It’s a bad feeling and you better trust it.

My friends Paul and Sue, whom I’ve known forever, visited me right away when I moved back. They knew me before the recession, before I lost everything. I was actually well-off then. Owned a house, car, business. Those things can disappear in an instant, so fast you can’t believe it. You think you are secure. Trust me, you aren’t. A million dollars means nothing.

I know that when Paul and Sue and their sons saw how things were for me then they were… well, I don’t know what they were. They never said. Sue drove me to the store. When it became apparent I had no money for food, her and her two sons brought food to my house. I always made sure my cats had food. They came first.

Things kept getting better. Made a little money. Lived in a house with a big yard, grass (we didn’t have that in California) and plenty of windows. The first warm day I went outside and just laid down in the grass. It was the first time I felt safe in a long time. My cats watched me through the window. That was a good feeling. I still remember that moment, lying there in the grass.

On one trip to the store I bought a coffee maker, $22, a huge can of coffee (don’t remember how much) and a coffee cup. It’s still my favorite cup. I worry about breaking it. It would be a bad omen.

So with this new coffee cup, I am pretty careful.