A Victoria’s Secret ad run on Facebook after I used Photoshop to retouch back to what I thought were normal looking, physically fit females.

Top fashion brands like Victoria’s Secret have taken heat from consumers and media for manipulating the appearance of their models through both real diet and exercise regimes and also by using photo retouching techniques to make the models appear thinner, taller, and without skin blemishes.

I wondered what would happen if I used Adobe Photoshop to retouch a Victoria’s Secret ad seen on Facebook in the other direction. I wanted to make the models look more “average”, more like my impression of what physically fit females actually look like. Here are the results seen side by side.

The original ad on the left, my retouched version on the right. It took a lot of work to get rid of all that “thigh gap”.

The project took about 20 minutes in Photoshop, and I am not a skilled user. I used the “liquify” tool, the rubber stamp tool and the masking tool. For an expert in Photoshop the results would be better and quicker.

When I put the two photos next to each other I was struck by how truly bizarre the actual Victoria’s Secret ad looks. The two girls in the center with bare midriffs look truly weird in the real ad, and look a lot more realistic in my Photoshopped version.

The thing that struck me the most was that the ad I Photoshopped now looked pretty reasonable. The actual ad, before my Photoshop, looked freakish.

I don’t know how much (if any) Photoshop is done in an ad like this one for Victoria’s Secret. I do know it took 20 minutes of work to restore the image to my perception of a more normal, fit looking bunch of girls on the beach.

The heart and reality of modern triathlon is the everyday hero, not the thigh-gap supermodel.

Who does triathlons in the United States today? What does the “average” triathlete look like?

Industry dogma suggests all triathletes are high wage earners between 30 and 45 who aspire to race Ironman (or already have). They own a $10K bike, race wheels and a power meter. Their household income is above $120K and they have a graduate level degree. They are the marketer’s dream come true: Young, affluent, fit and shopping.

There are two problems with that “demographic”: it’s outdated and likely wrong. Why?

Set the way-back machine to December 2007. Economists agree this is when the Great Recession started in the United States. It ravaged personal discretionary income and decimated those just hanging on to upper middle class. Many haven’t recovered to pre-recession income and savings levels even though the recovery has thundered ahead, dropping them from the pack like a newbie on their first group ride. Those that have recovered or never suffered an economic loss may be reluctant to part with cash earned during the stock market gains of the past seven years. Americans seem less eager to carry debt, despite an ominous recent spike in credit card debt. Discretionary spending decisions have tightened in the post-recession era.

Many of the tired marketing statistics rehashed about triathlon were collected prior to the 2007 recession– and haven’t been updated since. The post-recession demographics for triathlon have changed.

Americans have also changed physically. We’re heavier- all of us. The number of svelte, uber-athletes is smaller now than it was 20 years ago relative to the general populace, who apparently has been spending what’s left of their shrinking discretionary incomes on Krispy-Kremes, not qualifying for Kona. 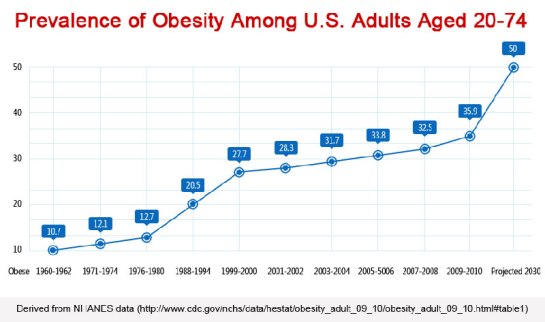 Americans, including triathletes, have gotten heavier and may continue to as a population. Triathlon has failed to market effectively to that reality.

As a result of this economic and health demographic shift triathlon has filled from the bottom. The sport is growing from an increasing number of new athletes who are more average, heavier, less athletic but still inspired to participate– if not necessarily compete.

This is good news for the triathlon industry if they become more pragmatic about who is really doing triathlons. History suggests the triathlon industry isn’t very realistic about its own consumership. It continues to (try to) market to the svelte, Kona demographic in print and internet media- even though the inspirational stories that bring people into the sport are usually the saga of the everyman participant who had to overcome to participate, and doesn’t really compete.

This fundamental misunderstanding of the distinction between Participation and Competition is what continues to hold the triathlon industry back. It is also why retailers have a hard time earning consistent profits from a market they are increasingly out of touch with.

There has never been an ad campaign in triathlon featuring realistically sized, average age group triathletes. In fact, the same rebellion that has happened in women’s apparel marketing with consumers raging against brands like Victoria’s Secret and Abercrombie & Fitch is ready to happen in triathlon. The middle 90% wants triathlon to “get real” about who is actually participating, and they don’t care about who’s racing in Kona.

A gold standard metric for triathlon marketers and product managers has been the “Kona Bike Count”, a census of brands and models seen in the transition area of the Ironman World Triathlon Championships in Kona, Hawaii each year. This increasingly irrelevant set of metrics is still used to (try to) sell everything from race wheels to bikes to power meters. There is one problem though- as the sport fills from the bottom the assumption that every participant aspires to emulate the couple thousand athletes in Kona is statistically flawed.

A bike company may devote six figures and more to developing the next triathlon “super bike” costing over $5000 (and even $10K) but they have failed to develop inspiring new designs in entry-level triathlon bikes. If a bike company introduced a comfortable, high head-tube bike with aerobars and a comfortable saddle with an aero appearance at the $1500-$2200 price point it would be an easy decision for new triathletes. New triathletes aren’t interested in the tired marketing paradigm of wind-tunnel white paper dogma that is debated ad nauseam among a shrinking number of triathlon Internet forum mavens. They just want to sit upright on their bikes, be comfortable, look presentable and have a good experience at their triathlon.

Apparel manufacturers have missed the mark too, alienating prospective customers with images of sponsored pros with little or no recognition among average triathletes and building clothing that is too tight, too short and in size runs that are humiliating to try on. If a forward thinking triathlon apparel brand introduced a tactfully marketed apparel line called “PR” with upward-adjusted size runs, modest cuts and middle-road visual appeal they would outsell too-tight, mis-sized brands designed to fit anorexic Kona winners.

The idea of every triathlete being the “alpha consumer” isn’t accurate anymore. Triathlon has changed. The sport is filling from the bottom. It has become an “everyman and everywoman” sport. The vision of the triathlete as a super fit, alpha-consumer threatens the sport by becoming increasingly exclusionary. It fails to welcome new athletes and creates barriers to entry like body image and entry price.

There will be big and quick rewards for the first triathlon brands who acknowledge this in their product mix and marketing message. The money is there to make, but it must be earned through pragmatic product design and judicious, ego-free marketing. The first brands to reach the finish line of the new, realistic paradigm in triathlon marketing will be the new podium finishers on the top of the sales charts long after the “winners” of the Kona Bike Count are forgotten.