Mrs. Hawkins was my fifth grade teacher. She wore long skirts and horn-rimmed glasses. In every way, the elementary schoolmarm. I was 10-years old. At this age we form our perceptions of the world and values. When the normally deadpan Mrs. Hawkins spoke of the Battle of Dunkirk she became animated. She orated about the desperation, the fear, the heroism.

I don’t remember anything else from 5th grade or Mrs. Hawkins. I only remember her animated recounting of the Battle of Dunkirk. I was captivated.

For those thin on history, The Battle of Dunkirk was a terrifying turning point when the world began to believe Nazi Germany could not be stopped. Hitler’s army drove the free French and British to the coastal northern border of France. They had no more land to retreat to. They were trapped and likely to be rounded up in a humiliating rout, or annihilated as the Blitzkrieg, Hitler’s “lightning war”, rolled north. The implication was clear: Britain was next.

Boyhood recollections are frail and nuanced things. Would this movie honor my recollections of Mrs. Hawkins’ theatrical oration from way back in 1972 about the horrors and heroism of Dunkirk?

I remember my teacher’s recounting of The Battle of Dunkirk as a grainy black and white photo from a history filmstrip.

The Battle of Dunkirk is a uniquely British drama. Men were reserved and dignified in stoic heroism. They wore wool uniforms and held tightly to military conventions. Leaders were leaders and foot soldiers were resigned to their often-drudgerious life as ground-pounding order-takers. There were heroes in every rank, every role, but the most gallant flew the Spitfires and Hurricanes above the bloody sacrifice of land battle.

That was how I pictured Dunkirk: a tragic epic on the scale of Greek mythology. I did not want that boyhood impression sullied by some poorly executed, fast-cut, CGI remake of “Saving Private Ryan” that relied on shock and gore to impress.

Director Christopher Nolan’s film “Dunkirk” honored my boyhood impression as though it were a beautiful, lyrical poem recited by a Shakespearean actor in a quiet theater setting.

In every way, “Dunkirk” is perfect.

Tense and deeply stylized, Writer and Director Christopher Nolan’s “Dunkirk” adds a new level of sophistication to the war movie genre and a creative new way to depict the enormity and horror of war.

Beyond its theatrical depiction of the Battle of Dunkirk in grey, somber visual and musical tones, “Dunkirk” also pays homage to the British resolve that saved the nation. Every person in England during WWII could be regarded as a guardian of freedom, unlikely heroes rising to confront the terror of war.

In “Dunkirk”, actor Mark Rylance who plays “Mr. Dawson”, is all of Great Britain. His character, and those of his sons, defines “Keep Calm and Carry On”. He also exemplifies adherence to tradition and dignity that makes Britain great. Rylance’s performance carries a significant amount of the weight in “Dunkirk”.

“Dunkirk” is completely unlike any war film, and perhaps epitomizes an elegant transition in film making to a new visual and audio feel. The film strikes an optimal balance between flow, image, sound and dialogue. The haunting soundtrack of Hans Zimmer, whom you know from the masterful score of “Blackhawk Down” and “Gladiator”, adds additionally sensory experience to the story. Its effect is trance-like and poetic, as I remember my teacher’s glassy-eyed account of the battle. With the measured use of editing the film flows beautifully, no small accomplishment in this era of movie making.

More importantly than just seeing “Dunkirk”, it is worth studying not only as a historically inspired based-on-fact accounting, but also a masterful new direction and flavor of filmmaking.

Author Peter Benchley’s marginally successful novel “Jaws” was released as a movie 42 years ago today. The film shattered box office records, rewrote the rules on movie release methods and touched off a succession of progressively awful sequels and occasionally credible documentaries that continue to fuel fascination- and mostly unreasonable fear of sharks- to this day.

Since “Jaws” every shark attack makes headlines. Nearly everyone remembers seeing the film with its shocking surprise visuals and its oddly floppy fake rubber robot shark. But most terrifyingly, everyone remembers the scenes in the water when you can see… nothing.

Director Steven Spielberg did an incredible job of building tension and terror in the unknown with soundtrack, lighting, foreshadowing and a looming sense of unseen menace. And of course, those two low notes of music that now universally signal impending doom: “duh…DUH.”

Speilberg’s skill was so effective it has created several generations of people with an irrational fear of the water, absurd notions about sharks as wanton maneaters and a general and wholly unwarranted misconception about the sea.

My girlfriend was afraid of the water. Not just what was in it, but even putting her face in it. Eight weeks later she swam unprotected at 70-feet depth off Roatan Island in Honduras in a school of 10-foot sharks in a feeding frenzy while I photographed her. Her only anxiety stemmed from my penchant to swim too far away from her to try to photograph, and pet, the swirling mass of “man eaters” as they swam around us.

My girlfriend Jan at 80-feet depth in a school of nice-sized reef sharks.

The truth is, sharks aren’t really that dangerous. In fact, I’ve spent years and thousands of dollars in travel and equipment just to find them for the chance to swim with them. And when I have been successful, which takes time, money and work. I have always been rewarded. They are beautiful and majestic. Often they are even gentle and playful.

I have swum in schools of sharks, petted sharks, fed sharks, and photographed sharks while in the water with them. No cages. Not one has ever tried to bite me. One shark in Curaçao demonstrated aggressive behavior toward me, she may have been playing with me, but she was big and she and I did not speak the same language so I simply swam away from her. She left.

Sharks are not wanton killing machines as Peter Benchley’s fictional novel suggests. Benchley’s novel is based loosely on a real life incident that took place between July 1 and July 12 in 1916 along the New Jersey coastline and, oddly, far up a small, brackish water rivulet named Matawan Creek. Sharks, or a single shark, attacked five people. Four of the victims died, more from poor first aid in 1916 than the severity of their wounds. One survived their attack.

The 1916 Jersey Shore shark attacks happened as American news media was growing and people were on summer holiday. It made for sensational (and grossly embellished) headlines. It sold newspapers, pamphlets and books. And it created an absurd level of hysteria and fear so vast it continues today. Talk to any modern triathlon competitor about their biggest fear, and they will tell you it is swimming in the open ocean.

While the 1916 Jersey Shore attacks were terrifying, they were a bizarre anomaly likely attributable to a unique happenstance in shark behavior. A large shark was likely confused by the moon phase that influenced the tide and accidentally swam upriver as the water salinity (salt levels in sea water) increased in the usually fresh water. As the shark became increasingly distressed, it became increasingly aggressive and panicked. And it bit people. The same behavior is common from a squirrel, a house cat or a panicked dog. But a medium size shark can inflict a larger bite than a dog.

Since Benchley’s novel and Spielberg’s movie was released conservationists have had to wage war on the terror-driven misconceptions that have caused unreasonable fear and wanton killing of sharks. To this day the unwarranted fear continues, not only of sharks, but of the ocean in general.

Could a shark bite you? It could. But the chances are more than remote. They’re astronomical, even when you are in the water with sharks. Think about this, if you were on a street with three strange dogs would you be panicked about them attacking you? Common sense dictates you observe their behavior and go about your business. The exact same is true of sharks. Even the rarest of sharks, the holy grail of shark spotting, the great white shark, is relatively placid when not feeding. If you are ever lucky enough to actually find one it will likely swim away in disinterest.

Our fear of sharks and the ocean is like nearly all fears. It is founded in lore and ignorance. The remedy is learning and understanding while developing a strong respect for this vast remaining wilderness and the marvelous creatures that live in it. 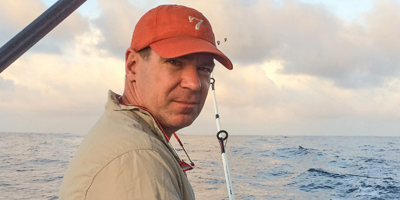 Author Tom Demerly will pet just about anything, even sharks, but never catches any fish.