Mimi the cat loves the sink.

I don’t believe in fairy tales. That I’ll admit to…

This is a story of heartbreak, healing and coincidence so odd it makes my brain itch.

Fred was my cat, my very best friend. Every pet owner will tell you their pet is the best but Fred actually was. Mistreated as a young cat before I got him Fred wound up with me after being rescued and cared for. He had only one functioning eye- his left eye- and was missing teeth. He was orange and white with the temperament of a cartoon character. A trifle overweight, Fred was a cookie-stealer. If you set your cookie down he would grab it with what teeth he had left, then settle for licking it. I lost a lot of cookies to Fred.

At night Fred would sit on the counter watching me do dishes or make tea. I would read to Fred, he liked the sound of a human voice. He loved books about African safaris. He also liked the BBC World News on the wireless. Fred would purr most times when you talked to him. If I asked him a question he wouldn’t say anything because cats can’t talk, but he would always seem interested in what I had to say. At night Fred would sleep next to me, purring until one of us drifted off.

Even though Fred suffered terribly as a young cat something in his cat brain made him a kind animal. His default reaction was kindness. If Mia, my little cat, would attack him, he would simply lay down. If she attacked him again he would make a low rumbling noise and walk away. Fred outweighed Mia by ten pounds, but he never took advantage of it. Fred was wired for kindness. In this life that is a miracle.

Eventually the things Fred suffered as a young cat caught up with him. He was old, no one knows how old. In his later days he moved slower, stayed in one place more. He never complained. One morning I woke up and Fred wasn’t in bed anymore. He got up early, walked downstairs and lay down near his water dish. He didn’t look good. I called my friend T.J. to take him to the emergency vet. T.J. lives about 15 minutes away but was at my house in 10. I phoned the veterinary emergency hospital 3 miles away and gave them Fred’s vitals. Then Fred looked at me, meowed twice, and died. 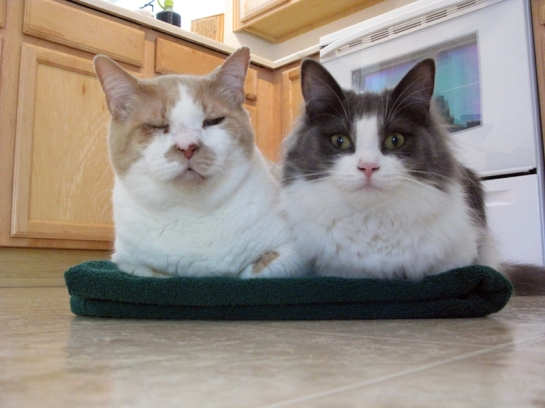 I cleared his airway, gave him mouth to mouth- all those dramatic things. I picked him up and we drove to the vet. The vet immediately went to work trying to revive him. But Fred didn’t want to come back. He was gone. His little paws turned white.

The vet brought him into an exam room with me. He was on a white blanket. And I was absolutely alone.

When I got home my little cat Mia, only 3, knew something was wrong. Fred wasn’t there. She had an odd look on her face and she lay on the counter in Fred’s spot in a little ball. For three days.

My friend Billy at work is one of those lads whose wild blonde hair is always messy, but always looks right. He rides a big motorcycle, wins his age category in triathlons. Billy decided to quit his job where we worked and move on. It was a blow since he brought expertise and personality to our workplace. They gave Billy a nice send off at a local pizza place. I normally don’t go to these things but Billy, being a good guy and a great coworker, was a special case.

Fred on the left before he passed away, Mimi the day I brought her home on the right.

I was hurting from Fred being gone. Life was awful. I was shuffling around the outside of the giant hole people fall into when they believe life is filled with suffering and loss. I hung a few toes over the edge of the hole. I felt like I was being sucked in. I pulled it together and went to the pizza place for Billy’s sendoff party. Everyone was enjoying the banter, my friend Pete from work was there and a nice sales rep named Travis.

People said they were sorry about Fred. Then Billy told me a story.

“I found this kitten when I was out running.” He said. I felt myself stepping closer to the edge of the hole. It was going to be one of those bad stories where he found a cat and it died. I couldn’t hear too many more of those. He continued:

“It’s eye was hangin’ all the way out of its head, it was in really bad shape man…” God, can it get any worse? This was painful to hear after losing Fred. “So I picked it up and took it to the animal hospital. They saved her.” He took a pull on his beer.

Then it struck me.

“Hey, which eye was the cat missing?” I asked Billy.

“What color was this cat?” I had to nip the onset of hopefulness in the bud. In this life, hopefulness only leads to disappointment. Things don’t work out. 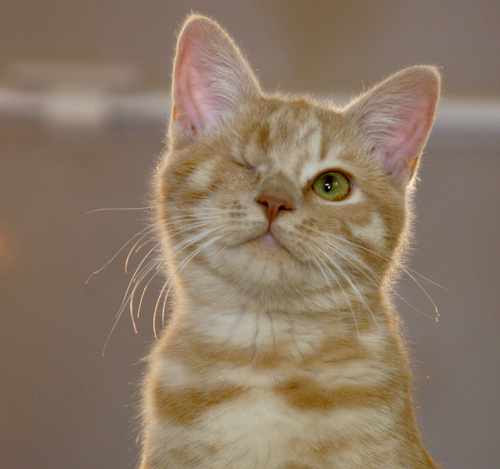 On the very same day Fred, my left eyed orange and white cat, died Billy found another orange and white kitten in a field with only its left eye. Run the variables. That is statistically bizarre.

But it gets weirder.

Billy took the one eyed kitten to an animal rescue run by a vet student named Gabe. They named the cat “MiMi”. They did an operation, removed MiMi’s damaged right eye. The same bad eye Fred had. They nursed her back to health. She put on weight, started playing with the other cats. She was oddly good natured according to Gabe.

I went to see this kitten. Gabe brought her into an exam room with me. Then he left the room, closing the door behind him with me and this little one-eyed orange cat inside.

The cat walked around, jumped on the counter. It was extremely small. Only 7 months they said. It sniffed, moving its little head swiftly to compensate for only having one eye. Sunlight filtered through a window in the room.

I sat there, this little kitten with one eye on the counter across the room from me. The absurdity of what I was doing hit me. A grown man. Sitting here like an idiot with an abandoned kitten with one eye. My cat died. It was gone. Maybe I should just deal with it. Life sucks and then you die. The kitten kept its distance. Quite some time passed. Why did they leave me in this room so long?

Then a thought entered my head, from nowhere. No one can hear me in here…

“Say,” I said to the cat, “Do you know Frederick the Cat?” MiMi went wild. She walked in tight circles and meowed three times. She leapt from the counter to the exam table, then from the exam table into my lap. She rolled over on her back in my arms, looked at me with that one eye and meowed one more time. Then she closed her eye and started purring. 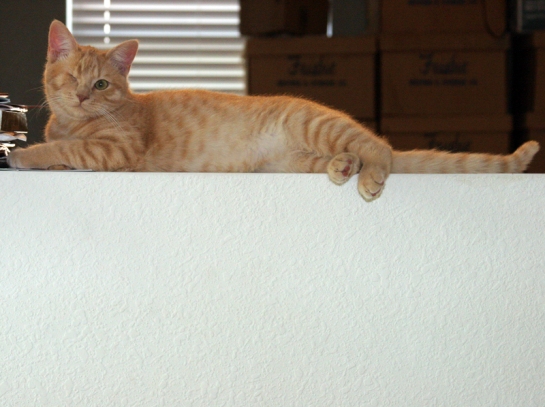 I filled out some forms and brought MiMi home. She knew where the litter box and the food were. She jumped up on the counter and sat in the sink. She tried to play with Mia the Cat but Mia couldn’t figure out who this new cat was and hid in the corner. Like she had seen a ghost. MiMi listened to the radio and fell asleep when I read to her.

Yesterday I was petting MiMi’s kitten fur. Before Fred died he had a sore on his left shoulder near his scapula bone. It was a raised bump that had to be drained of fluid. It was almost an inch long and about a quarter inch wide.

MiMi has a little scar there.