Be careful with Stefano Sollima and Taylor Sheridan’s latest blockbuster, “Sicario: Day of the Soldato”.

It’s sinister, seductive relevance carries a sobering slap-in-the-face wake-up call or toxic political venom. It’s your choice. But either way you lean with the theme, the relevance and mastery of this knock-out sequel make it a rare case of a follow-on achieving everything its predecessor did, and maybe even more.

Chalk it up to timing and headlines, but “Sicario, Day of the Soldato” is laser-guided relevant with weighty themes of Mexican immigration and political subversion. The real-world significance cause the movie to do something few films do now: you actually care about the story.

“Sicario: Day of the Soldato” follows the original 2015 “Sicario” with much of the same cast. Gone are character Kate Mercer (Emily Blunt) and Icelandic composer and Oscar winner Jóhann Jóhannsson.

New to “Soldato” are Isabela Reyes (16-year old actress Isabela Moner) and the ominous, throbbing soundtrack strains of Hildur Guðnadóttir (say “GWON-A-doh-ter). Also from Iceland, Guðnadóttir was previously a classical cellist who is relatively new to bigtime soundtracks. This is her break-out moment. The two opening notes from her main theme to the movie are resonant and foreboding. It’s the “Jaws” theme for the Mexican border.

Character Isabela Reyes, a youthful character forced into the story, replaces the role of Kate Mercer from the previous film. In the original “Sicario”, Kate Mercer was symbolic of all of America struggling to understand the drug cartels, immigration issues and complex injustices surrounding the U.S./Mexico border. In “Soldato”, the juvenile Isabella Reyes performs a similar function but from a different perspective. She never had youthful innocence, is resigned to a violent life and is calloused and durable. While Kate Mercer represented the U.S. relationship to the border issues, Isabella Reyes serves as a character metaphor for all of Mexico trying to understand the border crisis, and also falling victim to it. 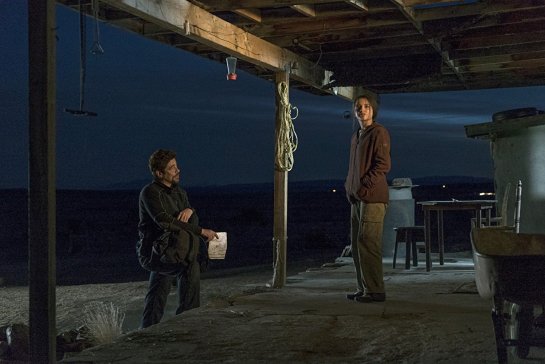 There is a complex lineage to the plot of “Sicario: Day of the Soldato”. The genetics of the story can be traced back directly to master story mechanic Tom Clancy. Clancy’s 2011 book Against All Enemies followed the path of Middle Eastern terrorism to central America and up to the United States across the Mexican border. That theme was also woven into the 2012 film “Act of Valor”. While this theme could have been structural to “Soldato”, it is, in reality, the only accessory to the main plot. The idea of terrorism entering the U.S. through illegal Mexican immigration is presented, and then seemingly abandoned in the film. If “Soldato” has a singular shortcoming, that is it. But this relevant footnote interlocks on the plot fairly smoothly.

An integral part of both “Sicario” and “Sicario: Day of the Soldato” are their remarkable thematic economy. There is no fluff. It’s all meat. As a result of this tight plot and orderly story you can never look away. Every scene matters, every detail engages. While the writing and organization of the theme facilitate this thematic economy, what delivers it is flawless visual production.

The visual experience of “Soldato” is beautifully textured with a subtle hint of well-done graphic novels. Composition of shots provides a true feel for the barren Sonora desert and the southern border region. It conveys something many people in the United States don’t get about the Mexican border issue: this is a different world from the rest of the United States. This writer lived near the Mexico-United States border for nearly three years, crossed the badlands between Arizona and Mexico numerous times and has stood across the wall from Juarez, Mexico. I’ve also lived in the Middle East and travel across North Africa. The border region has more in common with the Middle East and North Africa than it does with anywhere else in the U.S. As a result, most Americans have a tough time putting the border crisis into perspective. “Soldato” provides a visual insight that dramatizes the reality of the Mexico/U.S. border.

There is another brutally relevant gut-punch in “Soldato”. One that is as accurate as it is politically inflammatory. “Sicario: Day of the Soldato” acknowledges the weaponization of illegal immigrants. Whether they are Libyan and Syrian immigrants attempting to cross the Mediterranean to Malta or Greece, or Mexican immigrants trying to gain entry to the U.S., the exodus of distressed populations has been subversively used by nations to impose discord and hardship on neighboring countries. As the relationship between the U.S. and Mexico has degraded over the border debate, the flow of illegal immigrants into the U.S. has, by nearly all accounts, accelerated to a point where the question of what to do with the increasing number of people who cross into the U.S. has become deeply divisive. “Soldato” pulls no punches in editorializing that illegal immigration is being used as a tool by drug cartels and a corrupt government to destabilize the U.S. After the last two weeks of illegal immigration headlines in the U.S. and a couple hours in the theater with “Soldato” this light bulb goes on over your head pretty brightly.

Given all the relevance, economy, visual luxury and masterful execution of “Sicario: Day of the Soldato”, this film gets a spot on the very top shelf of the best dramatic thrillers as sharp as a paper cut from today’s headlines. “Soldato” is a rare sequel masterwork, durable and abundant with visual and thematic relevance.

Tom Demerly writes for TheAviationist.com and appears in Business Insider. His articles and editorials are read by millions around the world.