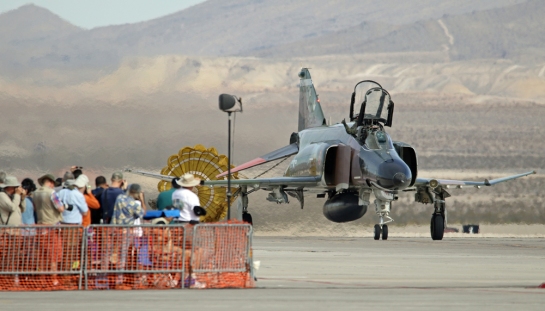 There were Army Rangers there with a giant boa constrictor. You could put the snake around your neck and have a photo taken. Famous test pilot Bob Hoover, who flew with Chuck Yeager when he broke the sound barrier in 1947, flew a Rockwell Aero Commander prop plane with both engines shut off. There was a real P-51 Mustang there too.

For the finale of the airshow the U.S. Air Force Thunderbirds would fly in their supersonic Phantom jets.

After the Thunderbirds landed the father of the kid I went to the airshow with, Alan Larraza, decided we might as well wait there instead of sitting in a hot car in a big traffic jam. Al’s dad heard a rumor that the Thunderbird pilots would sign autographs after the show if you waited. Of course, a rumor like that could never be true.

We waited on the wide expanse of the open airfield. There was smoke in the air and the smell of jet fuel. A fence separated us from the important men who got to walk close to the airplanes and actually touch them. The fence also separated us from the tall, thin men with sharp chins and crisp uniforms who looked like statues and wore their hair stubble short in perfect haircuts that looked like they were done this morning. Everything about these men was perfect- how they stood, the sunglasses they wore, the places they were from, the angle of their jaw.

These men were pilots.

I waited on the other side of the fence, where the regular people had to stay. I came from a single parent home where my Mom barely made ends meet. I wasn’t a great student in any subject except English, which wasn’t really even a subject since it was so easy. I knew, even at 8 years old, that I would always have to stand on this side of the fence at an air show. Only the tall men with the perfect haircuts, patches on their crisp uniforms and polished flight boots got to go on The Other Side Of The Fence.

The Thunderbirds were the biggest, most incredible, most important, loudest thing I had seen in my life. The sound, the smell of jet fuel, the incredible speed of their planes and the giant crowd that came to see them, even at the height of the Vietnam war protests (some hippies were kept outside the gate because they were protesting the “war show”). It was boggling to me that something could be so… big, so serious, so vast, so important.

Men on the other side of the fence in uniforms handed out a free pamphlet with photos of the Thunderbird pilots on the front. The photo on the front showed six men kneeling, one knee up, the other knee down, with big smiles and thin pilot hats. Every man was positioned identically in front of a giant, red, white and blue Phantom jet. These men were the actual Thunderbirds. And I got a free picture of them.

“If ya’ll stick around son, the Thunderbirds’ll be sign’n autographs soon e’nuff”, said a tall man with a cowboy accent in an Air Force uniform from the other side of the fence. He handed out the free pamphlets. Inside the pamphlet were diagrams showing maneuvers the Thunderbirds did, the “Diamond Roll”, the “Knife Edge Pass” and the “Roll Back to Arrowhead Formation” were some of them. On the last page was a photo of a real F-4 Phantom jet with all the numbers about it; how wide its wings were, how fast it went, how far it could fly. Everything you needed to know.

The crowd got thicker at the fence. Six tall men in blue jumpsuits and thin pilot hats were standing out on the concrete near the actual Thunderbird planes. All at once the men began walking up to the fence. The crowd pushed forward. People started holding out their pamphlets as the men got closer to the fence. When they got to the fence, people started snapping photos on their Kodak Instamatics and holding up pens. 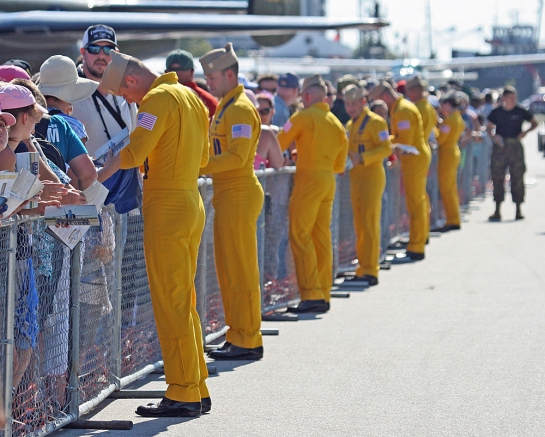 In a tradition that dates back to the first airshows, the U.S. Navy Blue Angels pilots sign autographs at the fence line after their flight demonstration at the Cleveland Airshow this summer.

The men in the blue jumpsuits shook hands, leaned over and let people take photos with them, smiling wide grins with their special sunglasses and shaking hands like they knew each other or came from the same town. The men would sign their autographs next to a photo of themselves with the number of plane they flew on the free pamphlet.

I held out my pamphlet. “You gonna be a jet pilot someday son?” One of the Thunderbirds asked me when he signed my pamphlet. He took a pen out of a special pocket on the shoulder of his jumpsuit. I was too stunned to answer. He was very tall. Every part of him seemed… sharp. Perfect. His life must be the opposite of mine, everything in order, everything decided, everything perfect. Everything sharp and perfect and clean.

I wanted that. But I never got it.

I joined the Army and did minor work in a special operations unit that gathered intelligence. I wound up with the guys who had the snake at the airshow. It was good, great even. We won a war, spied on the enemy and knew secret things.

But it was never- perfect. Not like the clean, crisp tall men with the red, white and blue Phantom jets at that first airshow.

A month or so ago I found out the McDonnell-Douglas F-4 Phantom II, the “Phantom jet”, would fly its last flight with the Air Force at the Aviation Nation airshow at Nellis AFB in Nevada. My girlfriend asked me what I wanted for my 55th birthday. I told her, not entirely seriously since it was such a big thing, that I wanted to see the F-4 fly for the last time. It was 47 years after that first airshow with the Thunderbirds and their Phantom jets.

In the way she works her magic my girlfriend, Jan Mack, got us to Las Vegas just a few miles from Nellis for the airshow. I write for an aviation website called http://www.tacairnet.com and wanted to do a story on the final flight of the F-4 Phantom II.

Jan and I meet co-contributors to TACAIRNET (Tactical Air Network) Melanie Mann and Ethan Garrity, both pilots from Texas. We’re sitting up front in the VIP area with catered food, our own bathrooms and chairs on the flightline and about 50 cameras.

There are two McDonnell-Douglas F-4 Phantom II’s here at Nellis AFB for its last official airshow. These last surviving two of only about seven left in the U.S Air Force, are called QF-4E’s. They have been modified to be flown by remote control without a pilot or with pilots. When they are unmanned other planes can practice shooting them down. Some of the QF-4E’s will die a fiery death, shot down by live missiles fired from brand new F-35 Lightning II’s out over the open ocean in tests.

One of the QF-4E’s here today is on static display so we can touch it and see it up close, the other will be flown in the final airshow demo by Lt. Col. Ron “Elvis” King and retired Lt. Col. Jim “Wam” Harkins of Holloman AFB, New Mexico.

I get to see the last F-4, touch it, look at how it has aged and weathered. I wonder where this aircraft has flown, when it was built, about what happened to the pilots who flew it and where they are today. There are old men here wearing F-4 Phantom hats. They’ve come from around the world to see it fly and touch it one last time. Some of them flew the Phantom a long time ago. One of them may have flown in that first airshow I was at 47 years ago.

There’s a convention that a pilot always says whatever aircraft she or he is flying is the absolute best. Pilots pick careful language to describe a plane they fly, and if you listen closely enough, you get a feel for what it must really be like.

I meet Air Force Lt. Col. Jim Harkins and Lt. Col. Ron King near the QF-4E they will fly today. A bunch of maintenance guys are tending to the tired old plane. Like an old person with difficulty controlling their body, she is leaking everything- fuel, hydraulic fluid. She needs a lot of maintenance to keep her in the air now.

“She’s old, but she still flies good.” Lt. Col. Harkins tells me. “We’ll be taking her home after this, then… that’s about it…” He signs prints of these two QF-4E’s I brought to the show with me. He writes the date of the last flight on the posters. I get a few signed, including one for my friend Lance who is back in Michigan taking care of Jan and my cats while we’re gone.

I shake the pilots’ hands. Thank them for bringing the F-4 out one last time. “You’re welcome. It’s a pleasure”, he tells me. We pose for a photo that Jan Mack takes of us.

And that is it.

The QF-4E flies its last demo. I’m focused on getting good photos of her but during one of the passes I lower my camera and just watch. The smoke and smell and sound are exactly like 1970. It’s 47 years ago and I’m a kid at that first airshow all over again. There’s a new plane here, the F-35 Lightning II, and pretty soon we’ll get a chance to see it fly, talk to the pilot, maybe even touch it if we’re lucky…