Here’s an incredible story for you. Even better, it’s true.

Right after WWII started, well before I was born, my parents moved to Seattle, Washington. Because my dad, Tom Demerly (senior) had an essential skill as a draftsman he was hired in at Boeing Aircraft Company. He worked at Boeing Plant 2 near the Duwamish River.

My dad’s first project was drawing an update to the B-17 Flying Fortress bomber: a “chin turret” for the front of the aircraft with two forward facing .50 caliber guns. The first versions of the B-17 lacked adequate guns to defend themselves from a frontal attack. German pilots learned this and attacked the B-17 from high and head-on, or “Twelve O’clock High”. The results were catastrophic.

Early B-17 crews attacking Germany had better odds of dying than surviving before completing their required 25 missions. In fact, more aircrews from the Allied 8th Air Force died over Europe than all of the Marines killed in the Pacific in WWII.

Because my dad showed promise at Boeing he was moved to their most secret program. He passed a rigorous background investigation and was prohibited from telling my mother what he was working on.

Half way around the world another young man who had also not yet had a son tended a small garden outside his house. Because of the war, food in Japan was in short supply so nearly everyone living on the outskirts of the Hiroshima grew what they could. He was a young lad, in his teens. His small house in the shadow of Mt. Gosasau provided a decent view down to the southeast where the city of Hiroshima was and, just beyond that, the opening to Hiroshima Bay where you could see Ninoshima Island. Except for the constant concern about the war, it was a beautiful place.

Back in Seattle my dad made top secret drawings. First, of the pressurized crew compartment. Then, of the new, remotely controlled gun turrets that held not two, but now four .50 caliber machine guns. He drafted the plans for the pressurized tunnel that passed from the front of the aircraft to the rear. The top-secret project was to be the biggest, longest range, heaviest bomber ever built by man: The Boeing B-29 Superfortress.

Gleaming silver, massively tall, improbably gigantic propellers with four huge blades at the front of the engines, four of them, each the size of a fighter plane themselves. The engines weren’t good. They had a tendency to catch fire. And the wings- sprawling, straight and thin. Impossibly wide. The B-29 was a colossus. Much larger than the previous B-17 Flying Fortress my dad worked on. They said the long lines of shining B-29s beginning to roll off the line at the Renton plant would “end the war”.

And then the changes came. The most secret changes. Draw a version with no gun turrets to make it lighter, more aerodynamic, faster. Modifications to the bomb bay and the bomb racks. Special attention to the problematic engines on these beyond-top secret, specially modified B-29s.

It would carry only one bomb. My dad did not know why. He drew the changes.

Things were getting tougher in Japan and the garden became more important. It needed tending in the morning, in the evening. Anything ready to harvest was picked immediately. Trips into town were avoided except when necessary. There wasn’t much news about how the war was really going, there were bombs falling on Japanese cities with horrific results. Tokyo had been decimated in terrifying incendiary bombing raids. But Hiroshima, so far, had been largely spared. So, the view from the young man’s garden still passed for peaceful when the air raid siren wasn’t going off.

The project with the B-29 modifications wrapped up and my dad went on to other projects. The big bombers were in the Pacific attacking Japan in what many people on both sides hoped was an approaching final act in this long, terrifying global ordeal. There was a collective desperation though, a deep breath still held by humanity on both sides of the world. 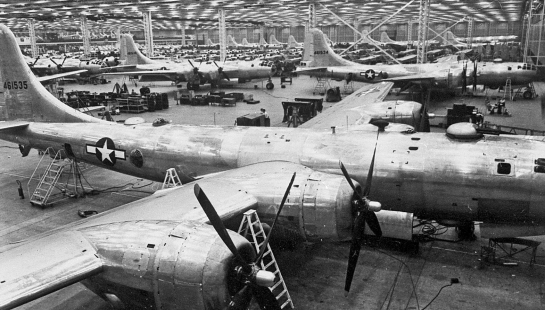 Boeing B-29s being built in Renton, Washington, where my dad worked.

No one knew how it would end yet. Only that it would.

Pressure and desperation seemed to build on both sides. Build toward some titanic climax. In Europe, the allies had stormed the beaches at Normandy. Patton was advancing across Belgium and France and into Germany. Hitler was in retreat. Russia had begun to crush him in a massive geographic vise from the east.

There was talk that the Allies may invade Japan in early 1946. No one knew.

Around the world from my dad, the other man was in his garden outside Hiroshima. It was 8:10 AM in the morning.

His back to the city, he pulled the few small weeds that had sprouted between the neat rows of vegetables, tamping the soft earth back down between the garden furrows.

Then, as he would later tell his son, who had not yet been born, “The sun fell out of the sky.”

A wristwatch in the Hiroshima museum frozen at exactly the time of the bomb’s detonation.

The plane my dad had helped design had just delivered the first nuclear strike on Hiroshima, Japan. The man watched from his garden as the sun, a new, manmade sun, engulfed the city. It boiled and sizzled and burned, then rose slowly up into the sky as a terrible shockwave cracked through the earth for miles. And a huge, dark mushroom cloud towered above the earth, the silence of death falling back to the ground.

A product of U.S. public schools, I, unfortunately, don’t speak Japanese. My niece does, fluently. She lives in Japan. Married a Japanese guy named Yukimi.

Luckily, Katsumi Shiji, my new customer, speaks very good English. He wanted to buy a triathlon bike. He had completed a remarkable number of Ironman triathlons and was trim and fit. Light hearted and courteous, Katsumi was always a pleasure to wait on. He was an automotive engineer and his command of both English and Japanese along with his expertise in automotive engineering meant his skills were in demand here in the Motor City and back in Japan, where he was from.

So, I was pleased to sell Katsumi a triathlon bike.

Because Katsumi was such an interesting man, I asked him where he lived when he was back in Japan.

“Hiroshima”, he told me.

I mentioned I would love to visit Hiroshima, and that it was sad that the city’s legacy was inexorably tied to the world’s first use of nuclear weapons.

And then Katsumi told me, “My dad saw the blast. He was there, in his garden, when the bomb landed.”

So here, in a bike shop in Dearborn, stood a man whose dad had survived the nuclear strike made by the plane my dad helped design. Some massive, cosmic circle had just been closed by utter happenstance.

I told Katsumi my dad’s story, and for just a brief moment, there was an awkward silence. Then I told him, “I am so happy to know that your dad survived.”

“Thank you, thank you!” He told me, “I am happy too…” He bowed slightly while we pumped each other’s’ hands up and down in a handshake.

The calculus of what happened when I met Katsumi Shiji still boggles my mind. I consider that some massive circle has been closed. Some full circle through the worst of human experience down to a friendly meeting of two men about a bicycle.

And it occurred to me, that the world had healed.