There are few wild things left in our lives, and that is what attracted me to the mysterious neighborhood feral cat we began calling “Mike Charlie 2”.

He visited in the night, we started feeding him. He visited more, we started feeding him more. I learned of a neighborhood feral cat “trap and release” program sponsored by the Metro Detroit Friends for Animals where feral cats were captured in a baited cage, taken to a veterinarian and neutered, given immunizations and then released back into their environment. A few e-mails and Mike Charlie 2 was on the list. Tracy Balazy of the Dearborn Animal Shelter/Metro Detroit Friends for Animals volunteered to bring a cage trap out to our house to catch Mike Charlie 2.

There are two “Mike Charlies” or Mysterious Cats. Mike Charlie 1 (Mysterious Cat 1) was sighted last year. He is also all black, but can be identified by an odd bend to the top of his right ear. When we first sighted them both a year ago, Mike Charlie 1 was significantly larger than Mike Charlie 2, and Mike Charlie 1 controlled the territory that surrounded our house. We learned that Mike Charlie 1 was called “Darth Vader” by local kids who saw him on his early morning and evening rounds out hunting and patrolling his neighborhood. Some people fed him, he caught local varmints. He quietly ruled the neighborhood as the alpha predator. While neighborhoods just a mile south of here complained to the city about a rat problem, we never saw a single rat. Darth Vader eradicated any pest rodents long ago. We soon learned from posts on the online forum Nextdoor Neighborhood that both Darth Vader and Mike Charlie 2 were related, likely brothers, and were members of a clan of feral cats that neighbors could trace back at least 40 years in the area. This was a noble clan of predators.

Darth Vader, or “Mike Charlie 1”, the original mysterious cat, is identifiable by the bent in his right ear seen in this remote night-vision infra-red game camera image shot in October 2017.

Friends for Animals of Metro Detroit volunteer Tracy Balazy set her traps at our house. Within hours we captured Mike Charlie 2. He was originally supposed to be participate in the Dearborn Animal Shelter/Friends for Animals of Metro Detroit’s free trap and release program. The no-cost program controls feral cat populations by trapping feral cats, confirming they do not have a microchip, evaluating their behavior to determine if they are feral cats or a lost stray, and then neutering, immunizing and marking them by clipping one of their ears so others can identify them as an immunized trap and release.

There was one problem with the plan. When I trapped Mike Charlie 2 I sat down next to his cage and looked at his eyes. They are a depth of green that is impossible to describe, if flame burned green it would be this color. As I looked at him in the cage, every ambition of freedom, wildness, strength and courage reflected back from those eyes. Nothing about Mike Charlie 2 was domestic or tame. When I tried to pet him, he hit my hand so hard with his paw he nearly broke it. It was bruised for days. Mike Charlie 2 made it clear that his domain was this neighborhood. He was no one’s pet. No one would own him. I realized that Mike Charlie 2 was everything I aspired to in life; free, strong, powerful, confident in his abilities and unwavering in his priorities. Mike Charlie 2 was something pure and perfect. To disfigure him by snipping his ear would change that, leave a mark on him. Somehow diminish his wild perfection. I did not want that.

I paid the animal shelter to not snip Mike Charlie 2’s ear, and send him through the same medical checks and procedures any pet cat would get. No ear snip, but Mike Charlie 2’s singular concession to civility (besides being neutered) was a microchip implant to identify him if he were captured by someone else. We had not provided a name for Mike Charlie 2, the animal shelter did not know what to call him, so Mike Charlie 2 became “Mr. Blackie” on his new microchip, invisibly implanted just under skin through a small incision. He was a little less wild now, but he was also a little safer, and that made me feel a little better. By now, having Mike Charlie 2 as the singular wild, perfect thing left in this neighborhood had become immensely important to me. Mr. Blackie returned to our house from the animal shelter, microchipped, immunized, vet-checked and neutered. I briefly felt bad about potentially ending the genetic proliferation of these noble wildcats, but there was still Darth Vader. According to everyone in the neighborhood, Darth Vader had never been trapped and neutered. Until he was, it was up to him to continue the gene pool in the neighborhood. Neighbors suggested his romantic trysts with other cats were legendary.

While Mr. Blackie recovered from his surgery he stayed in a large cage in our garage, an arrangement he very begrudgingly accepted. It was here that I tried to pet him, and he very clearly let me know that would never, ever happen. I gently extended my hand to him in his cage after feeding him, just letting him get a sense that I was close, but not too close. The instant my hand entered the kill zone of his powerful right paw he rotated his entire arm, straightened for increased power, wheeled it in a lightning fast circular motion, and hit my hand a blow so hard it felt like a fur-covered ball-peen hammer. I had a massively swollen hand and Mr. Blackie had made his point very clearly. Look, but never, ever try to touch, and let me the hell out of here.

My girlfriend Jan Mack and I released Mr. Blackie one warm Saturday afternoon. When we opened the cage he stalked carefully toward the exit, wary of some other kind of trap. As soon as he cleared the door, he became a bounding black fur-missile. Gone in two seconds over a high fence and between backyard garages.

And then we would wait to see if the trauma and betrayal of trapping him and subjecting him to his medical routine would permanently destroy our strange relationship.

I had flyers printed that were designed by lifelong friend and graphic artist Kim Ross. She did an amazing job, we got them printed and I walked the streets distributing them in peoples’ doors so they would know who Mr. Blackie was and that he was now part of the neighborhood.

Food is a powerful motive for a wild animal, primary even to reproduction. Since that second priority had been removed for Mr. Blackie, it was food that drove him back to us 48 hours after his release from detention.

At first, after his incarceration, Mr. Blackie did not look entirely well. The ordeal had caused him to lose weight. His coat- previously an elegant black cloak of glossy stealth-black night camouflage, now looked gray and patchy. Had this whole thing been a mistake? Mr. Blackie had gotten a bloody nose from colliding with his cage during captivity, such was his desire for freedom. He looked haggard and beat up. He looked like a stray, not a wild animal in beautiful harmony with his environment. Bringing Mr. Blackie into contact with humans had not been good for him, and it would take time for him to return to the powerful, wanton vitality that defined him.

Mr. Blacky visited daily and ate, and ate, and ate. On some days he downed three cans of cat food, the same amount of food all three of our indoor cats consumed between them in a day and a half. His appetite was ravenous, and he put on weight. His nose healed, his fur grew. He put on more weight. And he grew. It is likely Mr. Blackie has increased in overall size by at least 30% in the four months since we first saw him, partially due to the neutering, mostly due to a steady diet of healthy food. After about four weeks he slowed down to two cans a day, a caloric intake necessitated by his exposure to the elements, the need to maintain body heat, and the increased physical activity of a predator cat who ranges over more than a square mile of territory every day and can run twice the speed of a human for a city block, jumping fences four times his height in a single bound all the way. We heat his food in the microwave during the winter so he gets a hot meal. 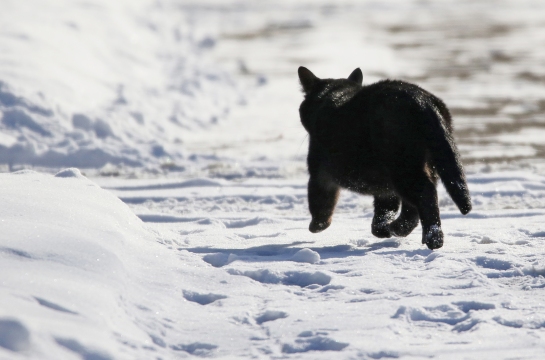