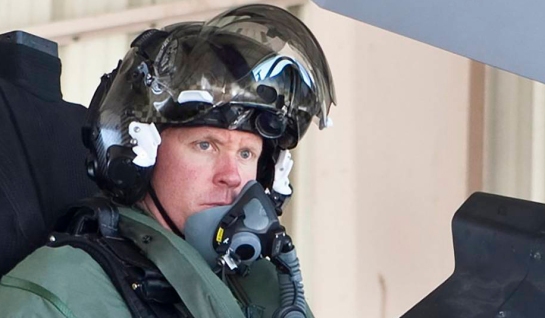 During the last 72 hours, I’ve written three articles read around the world about the death of U.S. Air Force Lt. Col. Eric Schultz. They talk about his career, and they guess at his mission at the time of his death.

But they say nothing about the man himself, Lt. Col. Eric Schultz.

During my research one photo continued to come up. The photo you see here of Lt. Col. Eric Schultz, USAF. It is on hundreds of articles written about him around the world in many languages. He is seated in the cockpit of a U.S. Air Force F-35A Lightning II, the Air Force’s newest, most advanced aircraft. I’ve seen that photo a lot over the last few days, but tonight was the first opportunity I had to spend some time looking at it carefully.

Who was Lt. Col. Eric Schultz and what does his life and passing mean to Americans and people around the world? I never met him, at least not that I know of, but I will try to explain what I have learned about him over the last few days to you.

Lt. Col. Schultz earned six degrees including a PhD in aerospace engineering. He had difficulty becoming a pilot because of his eyesight early on, but he did not let that stop him.

Based on what I’ve learned, Schultz never stopped, never gave up. Or, if he did give up once or twice as any human being occasionally does, he gathered himself from whatever setback he had, like his vision preventing the Air Force from initially taking him as a pilot, and then he got back to work. Schultz typified, in every way that I have read, the American ideal. Fortitude, integrity, selfless service, courage and more.

In his final role in the U.S. Air Force Lt. Col. Schultz effectively disappeared from normal life. No Facebook page, no LinkedIn page, no Instagram, no Pinterest. He took a job that required him to live and work quietly and honorably well behind the scenes in a role that could sell a million books and pack theaters with its story. But Schultz did all this silently, humbly, with integrity and honor and commitment to something he believed was greater than himself; his country.

However cliché it is to say, Lt. Col. Eric Schultz had The Right Stuff. A modern-day Chuck Yeager or Neil Armstrong who worked behind the veil of national security doing things we’d likely all find hard to believe. It is an irony of military service and the fickle nature of history that the greatest heroes often remain anonymous. Such is the case with Eric Schultz.

In short, Lt. Col. Eric Schultz was a hero and a role model. He is the American ideal. A man made of his own accord, with clear vision of his goals and steadfast resolve to achieve them. His goals were selfless and difficult. Schultz’s service benefitted the Air Force in ways we will likely never read about. His work spanned the globe, took him to war and cemented our ongoing peace at home that we enjoy today.

When internet banter criticizes the cost of a defense program or spins a wild conspiracy theory about the government, it does so on the parchment of a free press that Lt. Col. Eric Schultz silently protected. The delicate balance of peace here within our borders is insulated only by the tireless and quiet toil of the few people like Lt. Col. Schultz. We live and think and speak freely because of their vigilance and dedication. If for one instant you doubt this consider the building pressure that presses inward against our lives from countries like North Korea, Iraq, Afghanistan, Somalia, Syria and too many more to list. They remain at bay preserving our frail, precious bubble of freedom because of the very few people like Lt. Col. Eric Schultz.

I’m privileged to meet and work with the women and men of our Air Force, Navy, Marines, Army, Coast Guard and Homeland Security and our intelligence agencies frequently in my job. It is the best part of my job. They elevate me, hold me to a higher standard that I know I can never match. They make me believe in heroes and know that they exist. And they remind me that the simple liberties we so commonly take for granted like weaving tales of possible secret projects in hidden deserts are so tremendously precious, and so incredibly frail. I make it a point to shake the hand of a pilot or a Marine or an aircrew member or a maintainer or a soldier or a sailor when I meet them. I hold their hand tight for a moment, hoping that some of what they have will somehow pass over to me. I have heroes, and they are mine.

I am thankful for heroes like Lt. Col. Eric Schultz, and dreadfully empty when we acknowledge their loss. Their passing weakens the fabric of our nation, makes us vulnerable until someone else steps up to try to stand their place on the wall.