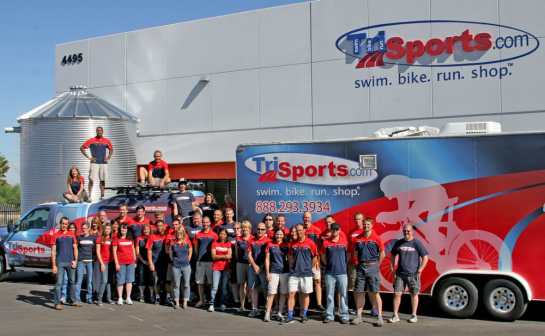 According to a report on social media and later confirmation from a leading industry insider late Wednesday, August 23, 2017, prominent triathlon retailer TriSports.com of Tucson, Arizona, is closing.

The specifics of the business closure have not yet been announced.

TriSports.com was founded in Spring of 2000 according to their website. Seton and Debbie Claggett of Tucson, Arizona founded the predominantly e-commerce triathlon specialty retailer. The business grew quickly as participation in triathlon expanded and local bicycle retailers were slow to adapt to the triathlon market.

During its history TriSports.com grew to become one of the largest triathlon retailers in the industry. They practiced a corporate philosophy of charity and sustainability that included corporate initiatives like paying employees to commute to work on bicycles and converting their corporate campus to entirely sustainable energy through a solar power and water reclamation project. The company and its leadership were also active in event and athlete sponsorship and community philanthropy including frequent projects to benefit Tucson’s large homeless population.

Founders Seton and Debbie Claggett were lauded as leaders in the triathlon industry.

Starting as a home business in early 2000, the company later leased space in an industrial park, continued to grow, then moved to a larger industrial space on the outskirts of Tucson near Davis-Monthan AFB. In summer of 2012 TriSports.com opened an additional, second retail storefront location in Tempe, Arizona. The Tempe store closed soon after opening. Following the closure of the second retail location in Tempe, Arizona, on June 14, 2013, TriSports.com filed for bankruptcy under Chapter 11 of the United States Bankruptcy Code.

TriSports.com emerged from Chapter 11 reorganization later in 2013 and continued operations until news of the business closure was leaked on social media by one of their sponsored athletes today, August 23, 2017.

No official announcements of the closure, the reasons for it or when it will be effective have been released, although industry confirmation of the closure suggests the reports are accurate.