Photos and story by Tom Demerly for tomdemerly.com. 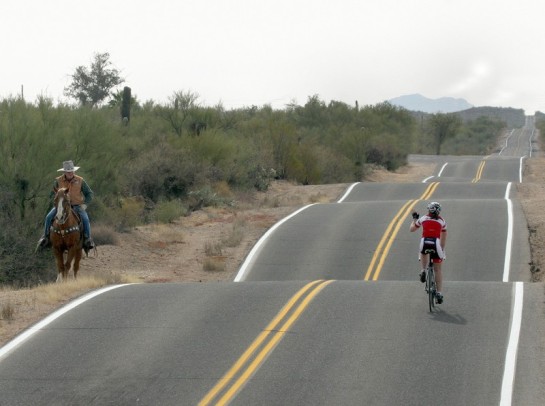 I didn’t move to Tucson, Arizona by choice. I was a refugee of the American Recession.

In a migration that mimicked a modern day “Grapes of Wrath” I took a job with the world’s largest triathlon retailer in Tucson and moved there after losing my own business in Detroit.

TriSports.com flew me to Tucson for an interview. Following the interview I was convinced I was finished in this business. The founder, Seton Claggett, asked some tough questions. I left with my head down.

But I got the job.

I did a little of everything at TriSports.com’s massive headquarters. Marketing, sales, promotion, writing, photography, video commentary, employee training, managing, sweeping floors, bike fitting, driving stakes in the desert and cleaning up trash by the roadside. Working there was immersive. The H.R. director counseled me that I couldn’t work as many hours as I did because it wasn’t good for me. But in reality, it was exactly what I needed: self imposed exile to the desert gulag.

Today we’re on a photo shoot.

I saw a road headed south from Mt. Lemmon, Freeman Road, that makes a lumpy black beeline toward the Mexican border. It looks like a black snake laid across washboard desert sand. It will be perfect for a photo shoot.

There are a few problems. Firstly, it is beastly hot in Tucson. Shooting in natural light with the sun overhead means working in the open desert at noon. Temperatures are well over 100 degrees. There are rattlesnakes, ill-tempered desert pig-bears called “javalina”. Every plant on the shoulder of the road is wearing knife-like thorns that pierce clothing and implant flesh with barbed needles.

Secondly, I have a clear vision of what I want the photo to look like, but without an aerial camera platform that shot is impossible. I want to show a cyclist riding south on the oddly rolling black road set against the desert backdrop. I chat with a couple local private pilots about the possibility of flying me over this road for the shoot, but the logistics and expense of getting a small aircraft over the road while coordinating with the cyclist/model on the ground make that impossible. We don’t have camera drones yet, and even if we do, getting the resolution and type of image I want would be tough from a small drone.

So, we load up the tallest stepladder from the warehouse, grab one of the big company trucks and recruit Debbie Claggett, a founder of the company, as fashion/action model for the day and head into the desert.

Debbie is a dream to work with. She is pretty, fit and knows how to ride. But it is a little awkward giving photo direction to one of the founders of the company you work for.

I describe the photo I want. We set up the stepladder on firm enough sand to keep me from falling into a prickly cholla cactus, and Debbie sets off south on her bike.

“Ride for about thirty seconds past those lumps in the road then do a U-turn and come back toward me. Keep doing those loops.”

Debbie does a few out and back circuits. I shoot a few frames. It looks pretty darn good. I’m careful to frame the photo so there is space to drop text in the upper left corner. It is a lot of work for a pretty simple photo. That said, the weird looking lumpy road is kind of cool, but it could be anywhere. Something is missing.

We need something that defines this photo as being distinctly Arizona. Distinctly Tucson.

We need a cowboy.

On queue a man who looks like he dropped out of a Clint Eastwood spaghetti western rides a beautiful horse onto the road. We could have spent hours in wardrobe and costume and not done as well. When you look up “Cowboy” in the dictionary, there is a photo of this guy. He is John Wayne, The Marlboro Man and Clint Eastwood all rolled into one with a dash of Boss Hoss for good measure.

Debbie recognizes the opportunity instantly. Without a word she wheels around, glances over her shoulder to check if I am getting this (I am…) and she makes a few riding passes by the cowboy. Smoke is coming off my cameras this is so good. 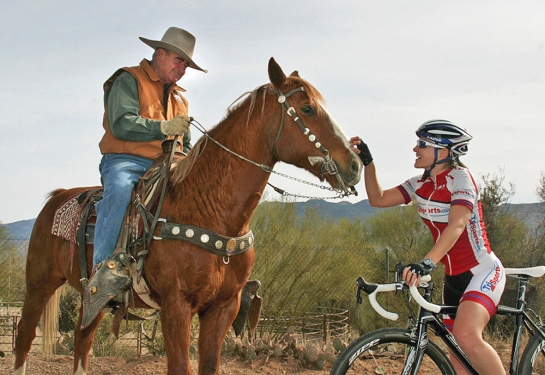 She stops and pets the horse. More incredible images that say, without a word, “Cycling in Tucson is extraordinary, there is no place like it in the world.”

We thank the cowboy and horse, load up our gear; brush off the dust and race back to the warehouse to see the photos.

This one photo describes riding a bike in Tucson, Arizona better than any single image I’ve seen, thanks to Debbie and the mid-day rider of Freeman Road in Saguaro East.