Photo and Story by Tom Demerly for tomdemerly.com 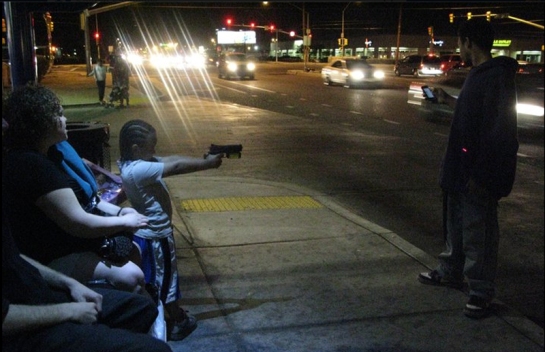 Always be ready for that perfect photo, a remarkable shot that stops people on the page and tells a dramatic story.

It is March 14th, 2011. I live in Tucson, Arizona. Just two months ago on January 8th, U.S. Representative Gabrielle Giffords and eighteen others are shot by a mentally ill man at a strip mall about nine miles north of this bus stop. The President of the United States visits Tucson four days later on January 12th for a memorial service to the victims. I attend his speech in person. He makes an impassioned plea for a review of gun laws.

The argument about gun laws in the United States is raging. There are very few laws governing gun ownership in Arizona. If you want to carry a gun, you simply strap it on your hip.  There is a dangerous border crossing with Mexico to the south, and drug trafficking is widespread. Tucson truly is the “wild west”.

I don’t own a car in Tucson so I either commute by bus or ride my bike. I worked late tonight so I am taking the bus home. Tucson has no street lights. Riding after dark can be dangerous.

This bus stop is crowded. Another bus has just dropped off passengers making a transfer. Civilian employees from the nearby Davis-Monthan Air Force Base are leaving work. There is also a secondary vocational training facility at this intersection that has just let out.

A man in a dark grey hooded sweatshirt is carrying a backpack. He is accompanied by a child. He seems nervous and fidgety. He keeps looking for the bus to come, but there are at least ten minutes until its scheduled stop. He removes his backpack, places it on the bus stop bench and pulls a cell phone out of the open pack. He tells the girl to sit on the bench, steps toward the curb and begins texting.

Suddenly the girl is holding an automatic pistol on him. A red spot of laser light- from the pistol’s aiming device- appears exactly center-mass on the man. He does not see the girl is pointing a gun at him.

Her finger is on the trigger.

The gun may be a toy. It may not be. Having a real laser sight on it suggests it is not a toy. It is heavy because the little girl has a difficult time handling it.

I raise my Apple iPhone and shoot one photo. You see that photo here.

There is a panic when the man looks up, a woman next to the girl recoils in stunned reaction. The man wheels and crouches away from the red laser dot, then advances toward the little girl, scooping the gun away from her.

I retreat back across the street to a convenience store as voices are raised. I am not sure if anyone saw me shoot the photo, and, I would prefer not to be shot.

My photo runs in a CNN article about gun control. It is widely circulated on social media, seen by millions of people. the debate about gun laws rages on in the United States.

Years ago I read a National Geographic book about photojournalism. It showed Robert Capa’s famous D-Day photos, blurry and indistinct. The book used those examples of how the technical merits of a photo are sometimes secondary to the subject matter. That book was why I decided to shoot this photo with my phone. Because, while that real or toy gun at a Tucson bus stop scared a few people, my smartphone snapshot scared millions.