Photo and Story by Tom Demerly for tomdemerly.com. 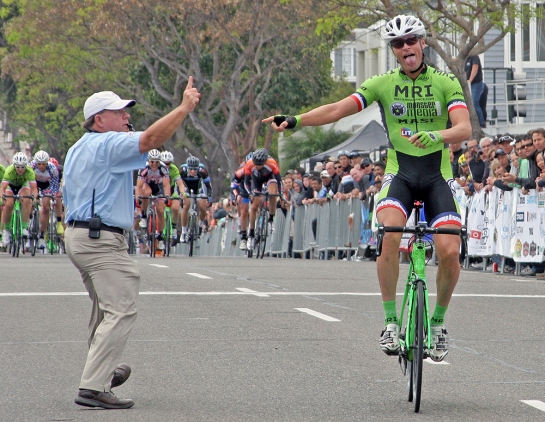 I moved to California five years ago to take a job with Felt Bicycles in Irvine. Didn’t have a car there so didn’t get around much. Friend and co-worker Dave Koesel asked me if I wanted to go with him to the Dana Point Gran Prix bike race not far away in the seaside community of Dana Point. It seemed like a good photo opportunity and a decent way to spend a day by the ocean.

I lived in Mission Viejo, California. It was dreadfully boring, with million-dollar houses and apartments packed together near manmade lakes ringed by planted palms. Living there is like being trapped inside a titanic, city-sized strip mall. Southern California is really one massive strip mall that begins north of Los Angeles near Santa Clarita and extends for miles south below Mission Viejo where the giant strip mall is briefly interrupted by the U.S. Marine base at Camp Pendleton, then the huge, connected strip mall of manufactured houses, condos, apartments and retail gallerias begins again north of San Diego. Viewed from space its a massive tapestry of buildings crammed together like a human ant colony. The freeways are slow-moving ant trails of BMW’s, Mercedes, Porsches and an increasing number of Teslas that skirt the coast moving at a crawl. It’s perforated by the San Andreas Fault at the base of the San Gabriel mountain range to the east. One day the “Big One” will hit and the entire thing will submerge in an earthquake likely to be the largest natural disaster in human history. But this is L.A., and people only think $2500 weekly paycheck to paycheck, an income which is lower middle class in this area. So no one cares that geology and plate tectonics has guaranteed that one day they’ll be swimming with the fishes.

Dana Point was probably a quaint SoCal surfer town before the marketing of Southern California made it a combination of a life-size PacSun, H&M and Forever 21 store with no parking. But nonetheless, today there is a bike race.

The Dana Point Gran Prix is a classic American bike race, a “criterium”, a race on a short, closed circuit with multiple turns per lap. It’s a great way to see a bicycle race since most criteriums are in a downtown area where there are crowds, restaurants, coffee shops and bars. The races are held in respective categories of riders based on age and ability level.

This race is the “Senior Pro, 1,2” race. It’s the fast guys. The low-level pros and the elite level amateurs and the local hot shot racers. Since this is Southern California there are a lot of hot shot locals, not all local to So-Cal.

The race progresses over successive laps and it looks like it will all stay together, no small groups or “breakaways” getting away today. Until the final laps.

One of the guys fighting for position at the front of this race is Karl Bordine. Bordine is bigger than most bike racers. He weighs nearly 190 pounds and is well over six feet tall. He is also a time trial or solo ride specialist and, even more remarkably for a bike racer in a criterium, Bordine is a triathlete. Mostly, Bordine is a little of everything. He can run, swim and bike, he can time trial and he can stay at the front of an elite level criterium like Dana Point.

And staying at the front is exactly what Bordine is doing right now.

I’m walking the course backwards from the flow of riders, the best way to watch a criterium, and shooting with two Canon EOS cameras. One camera has a 100-400mm image stabilized zoom lens, the other a workhorse 28-135mm zoom. With these two lenses you can do almost everything in sports photography.

There are three laps to go. There have been some breakaways and the group has just reeled one of them in. The race is now “gruppo compacto” or one big group of riders hurtling around the circuit over 30 MPH as they enter the penultimate lap.

In criteriums and track racing the final lap is signaled by ringing a loud bell, hence “bell lap”. While Bordine knows this he also knows his chances for a win are not in a straight-up bunch sprint. Those outcomes fall to the specialty riders with dare-devil bike handling skills and hair trigger acceleration out of the final corner on the last lap. That’s not Bordine. He is a “stayer”, not a “sprinter”. So he makes his try for the line early. Very early.

Bordine churns off the front of the pack by himself at 35 MPH. He has less than three laps to go. It’s unlikely he’ll survive without being caught. It’s the classic all-or-nothing gamble, but it’s Bordine’s best bet.

Initially it looks good. He is a bull of a man, beating his pedals and the air around him into submission. But at each turn he has to back off briefly to avoid crashing in the corners and then reaccelerate to full race speed. That effort does not suit the diesel-like Bordine. So his initially dramatic gap begins to slowly erode, the pack making progress like a virus toward healthy flesh.

Funny things happen to a bike racer at full effort. Blood is shunted to the muscles, their heart beats at 180 beats per minute, three full contractions per second. As a result the mind becomes very simple. There is only one thought; go.

So Karl Bordine makes a critical error, especially for a champion. He forgets to read the lap board at the start/finish line that counts down the remaining laps. He also fails to listen for the final lap bell.

As a result, Bordine believes he is winning on the final lap, with a big enough gap, just barely, to stay away.

Karl Bordine comes out of turn number 6 out of the saddle, the last of his legs being spent in final standing pedal thrusts slightly uphill toward what he believes is victory. The pack behind him has done the calculus and knows they will apprehend him on the last lap, somewhere on the backside of the course, where he will be unceremoniously spit out the back like trash in the vortex of a speeding train.

Bordine raises his arms in victory. And the bell rings, the bell signaling one lap to go. Karl Bordine has blown the lap count, sprinted a full lap too early, and lost the race before over a thousand spectators in dramatic style. It is one for the blooper reel.

When the USA Cycling Official raises his finger to indicate “one lap to go” as the bell clangs loudly Bordine realizes his error and that there is no use in even trying. Instead he clowns with the official, and I fire off a series of shots through my Canon.

This photo is the best one. And it shows that, no matter how fast an athlete is, no matter how good their legs and lungs are, that races also won between the ears.

Here is the entire original photo from that day: