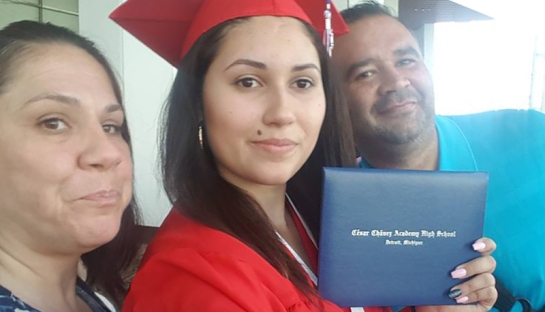 Miss Tellez joins 3.3 million students who will graduate from high school this year according to the National Center for Education Statistics.

Tellez broke the mold through quiet determination and tireless devotion. She works part time at Maple Heights Retirement Community, sometimes in the kitchen and dining area serving senior citizens who live in the assisted care facility, sometimes working behind the desk in the reception area.

Often times Tellez stayed well after her shift at Maple Heights, long after the geriatric residents had gone to bed, when she plodded with some frustration through homework in order to graduate. Her coworkers at Maple Heights lent a hand when they could between cleaning and taking care of residents.

But Tellez never gave up.

And Brianna Tellez’s mother is more right than she may realize. People like Briana Telez are the last hope and next promise for our nation to be great again.

In the past five decades the U.S. has decelerated in educational standards and achievement relative to other nations, sliding down the cross-national testing battery known as the Program for International Student Assessment or “PISA” to 35th place out of 64 countries in math and 27th in science.

The deceleration of academic achievement in the United States is the single largest opportunity our nation has to improve its economy, recover its environment, develop new technology and moderate threats to its national security.

In fact, every major campaign issue, from social issues to trade, diplomacy and the economy sag under the weight of an educational deficit that has lead to a trade deficit that has led to a host of domestic problems and a degraded ability to participate in solving international problems.

More than anything else, education must be our first priority.

Journalist George Packer wrote in The Guardian, “In or around 1978, America’s character changed. For almost half a century, the United States had been a relatively egalitarian, secure, middle-class democracy, with structures in place that supported the aspirations of ordinary people.”

But since the 1970’s something has slipped about the United States. There isn’t any one thing that has contributed to the decline of the United States. It is myopic to attribute one grand problem to one grand causation. The issues that have weighed down the United States relative to other nations over the last 30 years are vast. And the solution must be equally vast, but they eminate from one primary agenda: better education.

As we head into the final months of a pivotal and sensational U.S. Presidential campaign it is worth reflecting on how we got here and how we can do better, not just during the next four years but over the next four decades.

Brianna Tellez will be 58 in four decades. What will her United States be like then? It will arrive with dizzying speed, as the inevitability of history does.

What will her individual choices be going forward, and how will they shape our national choices and trajectory? So far Tellez has rejected the prominent narrative of her family leaving school. She has gone against the grain for a greater good, a better hope, a more promising future.

Will our nation have the collective wisdom to show the same courage as Brianna Tellez?