There is an axiom that Americans vote with their dollars, and the votes are in: Americans love their guns. They are buying more guns now than at any time in history. Why?

Despite fervent debate over gun law reform and national outrage about mass shootings the American reverence for firearms is not just continuing, it is growing. Here are some reasons why:

1. Firearms Symbolize our Defiance and Liberty.

From the pilgrims to the American Revolution, world wars, defiance of banks in the depression, and the emergence of equal rights the appearance of guns in our social and political landscape sends a clear message; Americans are willing to kill and die for liberty and equality. 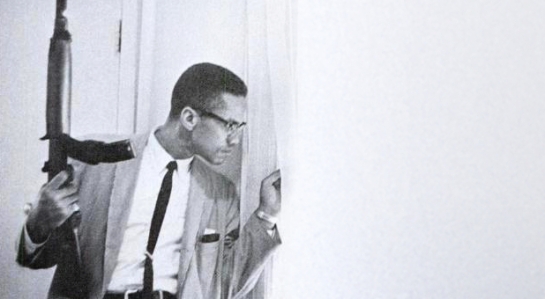 A 1964 photo of American civil rights activist Malcom X with a .30 calibre carbine and two 30-round magazines. Some Americans believe private firearms ownership is the last resort deterrent to government oppression and tyranny.

Our decisions about gun laws also say we’ll accept some “collateral damage” in the continuance of freedom. The unflattering reality of U.S. culture is that if we are willing to send our daughters and sons to war in the defense of freedom, we are also willing to let our sons and daughters die in classroom shootings in that same preservation. That’s an ugly reality, but America’s behavior confirms it as reality.

For some Americans, gun ownership is a “last resort” to maintain a voice in their own destiny, even if that voice is heard over gunsmoke and spilled blood. Exactly the same ethos exists in the Arab Spring. You’ve likely heard the colloquialism, “God created man, but Samuel Colt and Mikhail Kalashnikov made him equal.”

The rising volume of gun ownership in America could be an ominous portend- not about guns, but about our culture. Americans are hedging against some frightening outcome, real or imagined. It’s a sad commentary on our social condition if we feel we must resort to self-armament rather than democracy to guide our future.

A significant motive for gun ownership is sporting, recreational or some other discretionary motive. The increase in gun sales is like buying anything before it may become difficult to obtain, like coins or stamps. This is an honorable and reasonable motive.

While our reverence for guns symbolize our attachment to freedom and liberty they also acknowledge our inability to move forward from ways of thinking we formed when gunpowder was invented in the 9th century.

In a perfect world we would own guns peacefully, target shoot, hunt and compete without gun crime. Not by rule of law, but by collective moral conscience. Despite recent sensational mass shootings most gun crime statistics do suggest a downward trend in gun crime. That is better news for gun owners- and our society.

2. Shooting is a Rite of Passage.

Learning to shoot is a rite of passage into adulthood for some. One of the first, and most solemn, responsibilities bestowed on young men and women. When I was 11 my Uncle Norb, Indiana Pistol Shot Champion, taught me the three rules of firearms safety. He made me practice with an unloaded rifle. The next day he handed me my first live bullets. The implication was clear, “You are old enough and responsible enough to use a gun safely.” It was a solemn and respectful passage to adult responsibility.

Later, in the U.S. Army, my shooting heritage helped me learn combat marksmanship quickly and I excelled at it. It was another rite of passage to qualify with various firearms, small and large. As each successively advanced qualification was earned it became a greater and greater responsibility, not just to myself, but also as a soldier sworn to protect the U.S. Constitution.

3. We Value Personal Liberty and Responsibility Above All Other Values.

Personal responsibility is a part of out National DNA, and the reason for the NRA. It is foundational to our country. Individual gun ownership is about more than shooting or owning guns to Americans. It is a last bastion of personal responsibility; a “line in the sand” between deciding our own destiny or having it administered by elected officials that some people believe are increasingly disconnected from their constituency.

4. It’s Human Nature to Place Significance on the Forbidden.

Some people have no real need for a gun, but are caught up in the sensationalism that surrounds gun ownership now. They go to a gun shop and buy a gun, perhaps not truly understanding the significance of firearms ownership. Hopefully this group will practice good firearms safety, get training to safely use their firearm and remain current in that training.

5. Before It Was a Political Controversy, Gun Ownership Was A Pastoral Affair.

Our image, real or fabricated, of the American gun owner has shifted from sportsman, hunter and target shooter to right-leaning curmudgeon and self-appointed vigilante. Like most arguments the reality spans the entire spectrum between those extremes- with mostly middle ground.

Guns used to be mostly sporting equipment. Today they are viewed increasingly as weapons. While they are both, this shift in perspective is due to worldwide conflict and crime, and also a propensity of mainstream media to report on war and crime.

Millions of older Americans became familiar with guns and shooting during the World Wars. Having developed proficiency and comfort with firearms in a military context, the transition to a sporting context in civilian life was part of post-WWII America.

U.S. Army veteran, top competitive shooter, hunter and mother Julie Golob has been a voice of reason in the gun debate, but a voice that has received little attention in sensational mainstream media. Photo: Smith & Wesson.

Today the media does not report on Olympic shooting sports, safe hunting classes and stories about responsible gun owners. A more accurate look at the American gun owner is Smith & Wesson athlete Julie Golob. Golob is the reference American gun owner. She is a veteran, competitive shooter, a sportswoman, hunter and a mother and wife. Golob is the model for the American shooting sportsperson. She is vocal, responsible, educated and eloquent. But it is an uphill battle for a person like Golob. Her moderate perspective takes on an increasingly reactionary anti-gun lobby, the majority of whom have no idea what responsible gun ownership means or the role it plays in American culture. Golob’s primary mouthpiece has been social media like Facebook. Her message is successful and effective on that channel but seldom transitions to mass television news media, mostly because a responsible person teaching safe shooting isn’t good headline fodder.

It isn’t guns that have changed as much as it is society. Our society may be less responsible and is more communicative. Society feels more reactive and less contemplative. The collective voice seems larger while the independent will seems smaller.

6. Most of Our Society is Ignorant About Gun Ownership.

We are desensitized to violence through media. Violence enacted by “heroes” is a quick, profitable plotline for popular media from James Bond to Tom Clancy. Most Americans experience gun use in romanticized Hollywood film clips or gaming. They are detached from the responsibility of firearms ownership and the true role of guns in society. Popular media seldom depicts responsible civilian gun use partially because it is no more sensational than using power tools.

The truth about gun ownership in the United States is obscured by the circular, unwinnable arguments emanating from either extreme. There is a middle ground in the firearms debate, and that is likely where the majority of Americans reside, even if they aren’t vocal about it in social media. It’s likely this middle ground is what will drive our country’s firearms heritage forward.