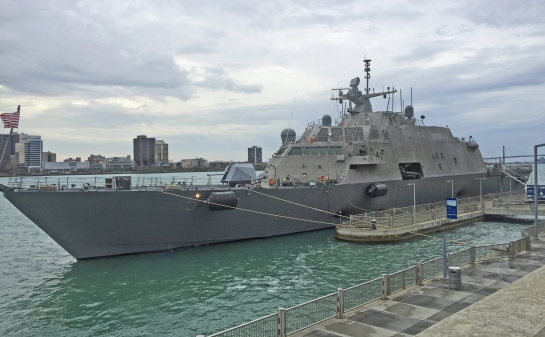 The USS Milwaukee is sister ship to the upcoming USS Detroit, which is under contstruction now and will be commissioned here in Detroit in 2016.

The USS Milwaukee was commissioned Saturday in Milwaukee, Wisconsin. After leaving Detroit this week the Milwaukee will sail through the St. Lawrence Seaway to the Eastern seaboard and then set course to transit the Panama Canal on the way to a stop at its home port of San Diego before deploying to the South China Sea.

On her bow standard the USS Milwaukee flew the traditional Navy Jack flag. This unique flag with its rattlesnake on stripped field, reminiscent to but different from the Gadsden Flag, is flown from the jackstaff of commissioned vessels of the U.S. Navy while moored at a dock.

A primary mission of the Littoral Combat Ship is the anti-piracy role in areas such as the Straits of Malacca, a dangerous, 500-mile wide passage between the Malay Peninsula (Peninsular Malaysia) and the Indonesian island of Sumatra. Small indigenous craft are frequently used by pirates to board merchant vessels, terrorize the crew and hold them for ransom. The USS Milwaukee will engage in counter piracy operations in these waters along with other missions.

The ship showed her BAE Systems Mark 110 57mm auto cannon on the fore deck, an advanced, precision, automatic naval cannon capable of firing over 200 rounds per minute with an effective range of nearly 5 miles. The gun is fully gyro-stabilized for precision fire in rough sea conditions.

The superstructure of the ship is coated with a low-radar reflective material to enhance stealth capability and reduce radar reflectivity. A wide variety of sensor and fire control antennae and scanners are visible on the superstructure including upgraded 3-dimensional radar masts, electronic warfare systems and countermeasures. The large black cylinders on the hull appear to be bumpers for mooring. A rigid inflatable boat, the type used by VBSS (Visit, Board, Search and Seizure) and Naval Special Warfare teams was visible in the elevated port launch deck.

When we saw the ship she was secured in preparation to get underway. Unlike some versions of the LCS the USS Milwaukee wears a standard grey paint scheme now. Some of the LCS’s wear a spectacular maritime camouflage scheme reminiscent of German raider ships from WWII. 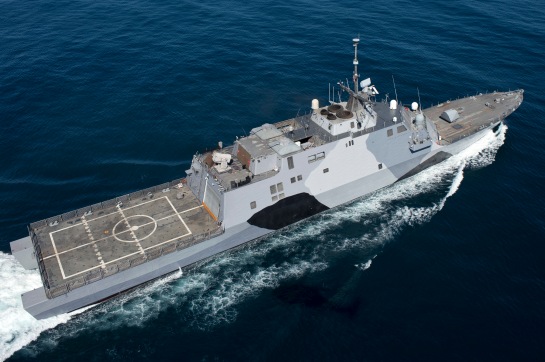 The USS Freedom (above, U.S. Navy photo) wears the distinctive camouflage scheme of some of the LCS’s.

The USS Milwaukee was built in Marinette, Wisconsin, where the USS Detroit also is being built. This LCS class vessel is 378-feet long and displaces 3,900 tons with a combat load. Her draft of only 13-feet means she is ideally suited for the shallow water, littoral combat environment for which she was designed, close-in, tactical, coastal combat within 200 miles of a coastline. The Milwaukee is extremely fast, with a top speed of over 50 MPH or 45 knots, more than fast enough to tow water skiers and faster than many civilian speed boats. She has a crew of 50 sailors to operate her, with an additional compliment of 25 other special operations Naval personnel depending on the mission.