I did my first triathlon in 1984. Since then the sport has obviously changed and grown. As a participant in nearly every capacity of the industry for over 30 years, since before the sport began, I’m fascinated with the trends in triathlon. It’s a part of my job to try to understand where those trends are headed.

Through the first decade of the 2000’s we sold triathlon as the recession-proof, upwardly mobile super-sport. It was a marketer’s dream with the median participants’ income of $126,000 per year (USA Triathlon demographics report, 2008) creating a fresh crop of cycling and multisport super-consumers. Bike brands conducted white-paper slugfests to attract $5000+ “superbike” buyers. New product categories were invented when consumers bought their ways through existing ones. Every domestic Ironman sold out in minutes. Other discretionary consumer categories may have suffered. Not triathlon.

It’s tough to get super accurate demographic numbers over the last two years of triathlon without paying for them. USA Triathlons’ demographic data is becoming somewhat dated. We’ve traditionally pointed to the Kona Bike Count for a sense of athlete buying behavior. That information may be increasingly misleading as it only measures athletes who qualified for Kona or got in through the lottery. Their buying behavior may be altered by their participation in Kona and different from a typical age grouper racing locally, the larger demographic.

Triathlon Business International, an industry think-tank and cooperative founded by Triathlon Hall of Famer Dan Empfield, publisher of Slowtwitch.com, has the data but asks $5,500 for the full report on triathlon participation, spending levels, shopping behavior and brand preference. Empfield is a skilled marketer and knows where and how to collect relevant data so the report is likely worth it to those with deep enough pockets, but in this editorial I am sticking to a few guesses based on observations.

One dictum of trends and passing time is that you can count on change. If triathlon has trended contrary to the economy, almost like a Bear mutual fund, then logic dictates we are in for a contraction of sorts when (if?) the economy rebounds.

Another negative factor is the erosion of profit margins at the high end. An increasing number of local alpha-athletes and hotshots enjoy some version of “sponsorship” that means they don’t pay full margin retail for high end triathlon bikes. At the bike brand level this may not be apparent. It is more apparent at the consumer level where retailers sponsor away high end consumers converting them to deep-discount buyers. If a bike brand only produces 200 units across a size range of a $10,000+ “superbike” but 30 of those are sold at a discounted “pro purchase” price it weighs heavily on the profitability of the remaining 170 units. 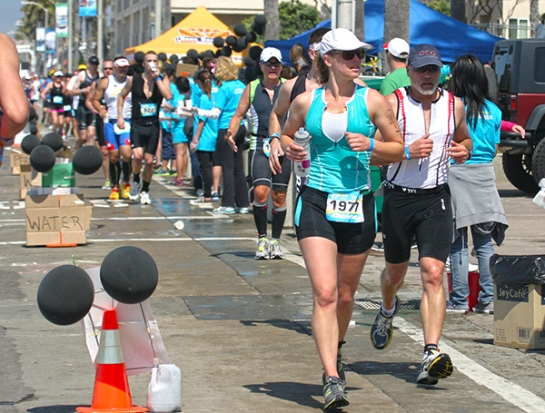 A few factors have acted on the current version of triathlon. The economy is one, contributory media another and the influx of female athletes a third. There are quite a few others. I suggest the amalgamation of these may converge to “normalize” triathlons over this next decade. Participation numbers will still be good, but the $100K+ earning individual will melt into a minority of participants that is more proportionate with the general population. Consumers won’t “compete” to buy $5000+ superbikes in the numbers we’re used to. Instead, they will look for bikes in the $1000-$2500 price point. Their participation in events will shift to local events. Ironman numbers will remain strong and sell-outs will continue, but as the sport grows or stays roughly the same in participation the sustenance will be at the “average athlete” level, not the superbike buying, Ironman-a-year doing super-consumer triathlete.

One of the key priorities of our sport has to become participant retention. One good way to do that is provide frequent and accessible racing opportunities. Randy Step of the Running Fit stores in Michigan introduced a series of short, inexpensive mid-week triathlons that are close to major population centers in Southeastern Michigan, an area ravaged by the recession. Step’s race series is three sprint triathlon events each named after a different dinosaur. The short distance races are held at 6:00 PM on Wednesdays, one in June, July and August. The races start at $64 entry fee, a bargain for a well-run multisport race. Despite the challenging local economy all three races will sell out, and all the previous events have too. Clearly Randy Step has figured something out.

As Randy Step’s race series in recession ravaged Michigan suggests triathlon may enter a period of “democratization”. We’ll see more participation from the fitness enthusiast and charity ride participant, a spin-off of the “cause racing” demographic. People will likely still aspire to Ironman, but they may not feel the need to own a $5000-$10,000 super bike to do it on. The demand for more accessible and less expensive events like Randy Step’s dinosaur series will increase. Along with that will be the demand for new and exciting bike models in that price category.

Historically the triathlon industry has been more reactive than proactive. Randy Step’s races are an exception. It’s possible that brands who position themselves to serve the mid to low price point recreational triathlon consumer now will be the first to reap the benefits and will enjoy them the longest before there is another change in the sport.