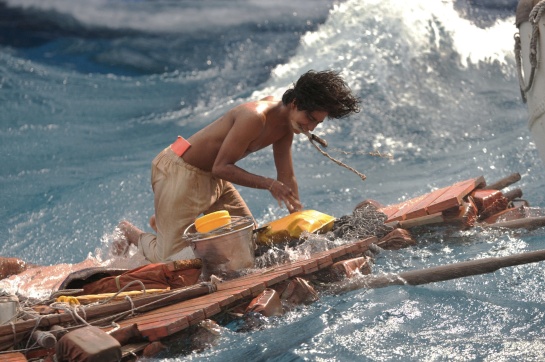 Get ready for an ordeal with a pay-off at the end in “Life of Pi”.

There are very few movies I am tempted to walk out of, but Life of Pi was one of them. The movie and the story are both an ordeal. I’m glad I stayed though.To appreciate Life of Pi you must have lived some personal version of the fable. If you have it’s worth the trip.

Life of Pi is a classic transitional and survival tale that follows a lad named Pi through his intellectual and spiritual coming of age then a dreadful shipwreck as the main story develops. You know the end at the beginning, some of it at least, so I’m not spoiling anything for you. The movie relies heavily on symbolism to the point of tedium, until the plot pays off in the final few minutes with a truly amazing sleight of storytelling. And that is why I’m glad I stayed.

Based on a book of the same name released in 2001 and shopped around from director to director Life of Pi wound up in Ang Lee’s hands after being considered by the eccentric M. Night Shyamalan. I’ll suggest a version under Shyamalan’s quirky direction would have been the final nail in the coffin for this story. Lee’s interpretation was its best chance short of Steven Spielberg or perhaps Richard Zemeckis who directed the well done Tom Hanks film Castaway of similar plot but different ending. Hollywood reviewers haven’t given Life of Pi much of a chance but audience reviews may prove them wrong. In hard times a movie like this will resonate. Viewer reviews have trended to four star territory even in the crowded holiday movie market.

There are three distinct visual styles in the film. The first is a beautiful and lilting mise-en-scene rich in pastel sepia that provides a gentle and reverent basis.  It has a travelogue quality I liked.  As the story shifts to adulthood it becomes more journalistic then back to stylistic during a tender first love.

Then it gets weird.

A 3D version of Life of Pi was showing at the same time as the normal one I saw. Thinking back after the non-3D version I can see how 3D may have added to the visuals in the bulk of the movie. Critics who saw the 3D version were positive about the effect saying it was used tastefully. I didn’t miss it since good camera work and lavish special effects carry the conventional version well along with the wild twist at the end.

The main body of the film charts Pi’s ordeal on a lifeboat with some unlikely companions. It becomes tense and stressful. Then it becomes downright painful. During one scene I had to convince myself to stay it was so difficult to watch. The only reason I did was in the hopes of some pay-off, some redemption.

An unlikely feature of Life of Pi is its addition to the body of survival literature. The movie teaches textbook survival lessons both technical and behavioral. It harkens to a few epic survival tales such as the book Survive the Savage Sea and a favorite of mine, Kon Tiki. There are lessons in how to survive, cope and go beyond mere survival in Life of Pi. For anyone who may rely on survival skills the film delivers on two levels, technically and with the strange twist at the end that teaches a valuable lesson.

The degree to which this movie works will depend on your own life experience. If you are a survivor, it will resonate and the ending will deliver. If not, it is just a tedious fable until a long-winded pay-off that may not be worth the wait.When you sit down in the theater you’re risking the two hours to see if that pay-off is worth it. For me it was, but I’m an easy sell for survival stories and its metaphors were a gut punch to someone who loves animals. After being pummeled by the harrowing scenes in the middle of the story I really wanted something in return. I came away entirely satisfied, both glad I stayed and glad I didn’t miss Life of Pi.