Over the last three decades a new set of business clichés has surfaced. They’re used by small companies trying to act big and big companies on the way to bureaucratic gridlock and subsequent meltdown. Never use these terms. They make you look like an idiotic lamb on the way to the recessionary slaughter of unoriginal thought.

People resort to clichés for three reasons: They don’t know what to say and clichés are convenient, fashionable and convincing to the dim-witted, everybody else is using them so they must be relevant and cool and they make you sound associated with the codified language of business insiders- but only to the uninitiated. As Godin mentions you can burn hours in meetings by just using these clichés and some Power Point as your business does ever shrinking laps around the drain. Throw in some Excel and you have most of what is big trouble with business both large and small.

Here are the most common business terms and trends to avoid:

The most obnoxious business colloquialism. A best practice is neither. Best practices are what someone talks about when they have no original thought and steal obsolete ideas from other companies, often as not, bankrupt ones. They aren’t the “best” of anything and usually don’t stay in “practice” since hashed over old ideas don’t work. Except in pointed sarcasm or abject mockery, never use this term. If people above you in your company use it, update your resume. If people below you use it, replace them.

Spreadsheets are more commonly collections of irrelevant statistics than meaningful tabulations. They are compiled in a manner that feigns logic to support some innocuous conclusion by someone with an agenda.  While the Microsoft Excel application used to craft most of these interpretive works of fiction does have useful applications, like finding Saddam Hussein (they did it with a spreadsheet) it is a lot like a paintbrush and an easel: just because you know how to use them doesn’t mean what you produce is useful. Spreadsheets support the useful business axiom: G.I.G.O., Garbage In, Garbage Out. In fact, the spreadsheet is every bit as interpretive as the brush and canvas but more dangerous since so many people accept a sort of “spread sheet truth”. Beware of people who boast about proficiency with spreadsheets. They wield a mighty ability to manipulate reality and bend it into some statistically supportable fable, generally to their favor. The spreadsheet disproves a time-honored axiom; sometimes numbers do lie. 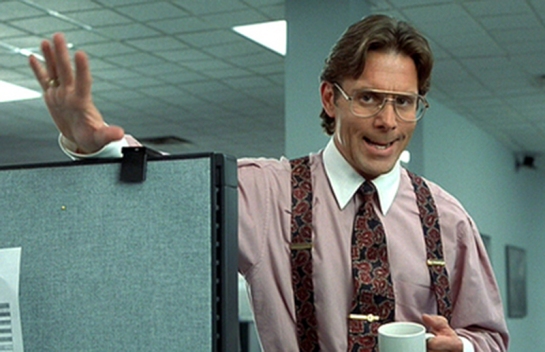 “Yeah…. I’m gonna need you to go ahead and get those best practices into a PowerPoint along with our latest metrics in a spreadsheet by tomorrow.”

Metrics come from and go into spreadsheets. That itself makes them evil. They usually wind up in a Power Point presentation from there. Even worse. The people using this term usually have no idea what it means. They are office Mina birds regurgitating some important sounding dribble their ineffectual boss or webinar dweeb spouted. Metrics are supposed to be a measure of something relevant. They’re usually the trees that keep you from seeing the forest, and produce a kind of entrepreneurial nearsightedness  that precedes things like GM’s bankruptcy and the Apple trouncing of Microsoft. The problem with the term “metric” is there are any number of better synonyms for the same thing. It is a term that is more fashion than function. Its adoption by the “Office Space” demographic has doomed it. Unless your goal is to look purposely unoriginal or suggest you lack insight, don’t use the term “metric” to describe any relevant set of business statistics. Pick another word, or better yet, take a tip from fast advancing middle managers everywhere; don’t say anything.

Definition; waste of time. The webinar is roughly traceable to the first espousing of calibrated ignorance under the guise of information by the Ancient Greeks and Romans. They called it satire. As with the Greeks, the audience often doesn’t realize they are being played. Webinars usually espouse best practices using metrics from spreadsheets. The perfect storm of commercial cretinism. In general you will know less after a webinar than before. They are sort of a virtual lobotomy. Enough of them and you may actually believe the company you work for has a chance of lasting another year. It doesn’t though, because instead of working, you’re wasting time making some buzzword huckster rich over the Internet listening to their webinar instead of selling anything.

The President was not entertained by another delay in the PowerPoint presentation.

When companies find themselves flummoxed on the edge of a fiscal precipice they will often announce an “A,B Test” to generate “metrics” to put in a spread sheet so they can determine their “best practices” and display them in a Power Point.  They learned this during a webinar last week. These are the death throes of the decreasingly competent. It’s like animals on the plains in Africa walking in ever tightening circles until they die of a brain worm or something bigger with more teeth eats them. Businesses that attempt this don’t know what or how to test. Usually they try to learn from a webinar. We all know the result of that. The danger with this term is it suggests some orderly and sentient analysis. There is seldom a correlation between the use of this term and execution of an orderly and empirical investigation. It’s just another thing companies do before they file.

The PowerPoint application would have been a useful presentation tool prior to the 1930’s when people were still amazed by anything big on a screen. Prior to PowerPoint there was the overhead projector.  PowerPoint is somehow worse than the overhead because it seems so easy to use. People rely on it too much and it has compromised the art and practice of delivering convincing and skilled presentations. Just throw up a PowerPoint, after all, when people are sleeping they can’t tell how stupid you really are. Putting any content into a Power Point slide lowers its “punch” by a massive factor. People have simply seen too much Power Point, and too much of it is bad Power Point. When the slides go up, people tune out. It is the crutch of the weak presenter. The bane of Power Point is it rarely works on the first attempt. Power Point would be better software if it electrocuted the presenter with increasing voltage for every second their stupid slide show doesn’t work before a live audience. Then the problem would fix itself, and be more entertaining.

This is another truly awful one. My skin crawls when I hear this. It smacks of desperation. No one wants to be “reached out” to. Drowning people and zombies “reach out”. Worst of all, there is a better word for this concept. It’s called: “Ask”. Don’t make yourself look foolish and trendy by using two ambiguous, trendy words when one will do. Just ask. Don’t reach. It’s not polite.

If your company has mission statements plastered on walls it’s likely they are so far away from their original area of competence they need written reminders of why they are there. Businesses write mission statements for one reason: No one knows what the company is really supposed to be doing. The irony is most businesses need a two-word mission statement: “Sell something”. That sums up the purpose of most commercial enterprise. When businesses get so distracted from that central purpose they need constant reminders of what they actually do a sign on a wall won’t pull them back.