They are among the most famous images in human history. The Robert Capa Life Magazine D-Day photos.

Blurry, poorly exposed and framed in terror, the images transcend photography and achieve a higher level of journalism: they are visual experience.

Robert Capa, whose real name was Endre Friedmann, was a Hungarian willing to go where no other war photographer would. He was the only news photographer on Omaha Beach with the early waves of the allied invasion force, hitting the beach with the second wave. Capa went on to shoot photos in five wars. His friends included Ernest Hemingway and John Steinbeck. 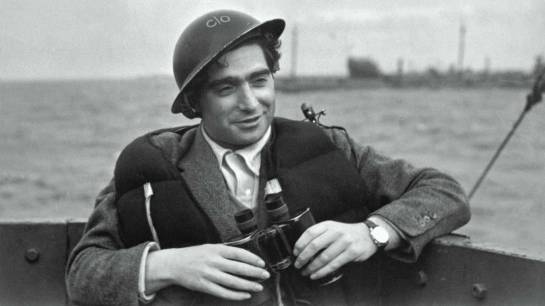 Photojournalist Robert Capa, the only photographer on the beach during the second wave of the Normandy invasion on June 6, 1944.

Robert Capa cut a dashing figure with handsome features and a jaunty smirk on his face. He did, in fact of matter, laugh at danger. He seemed to revel in it. Capa was 30 years old when he landed at Omaha Beach and shot his photos. His mannerisms and exploits defined modern journalists like Dan Rather, Wolf Blitzer, Christiana Amanpour, Geraldo Rivera, Peter Arnett, Robert Pelton Young, Evan Wright, and John Simpson.

The enormity and perfection of Capa’s D-Day photos cannot be overstated. They are, in every way, perfect photographs. Robert Capa’s D-Day photos not only depict what it looked like to be in the first wave of the Normandy landings, they demonstrate how it felt to be there. Horrifying, Chaotic, disorganized, polarized, distinctly black and white and desperate. Had Capa’s photos turned out to be well composed, in focus and correctly exposed with the negatives arriving to the darkroom undamaged our perception of D-Day and, in fact, warfare overall, would be different today.

The black and white medium speaks to the absolute polarization of the conflict. The battle of Normandy was not just the allies against the axis, it was a clash of good against evil. No battle since has been so clearly delineated in the public conscience.

The blurriness of the photos accurately chronicles the chaos of D-Day. Troops landed in the wrong place. Landing craft were swamped. Soldiers drowned before firing a shot. Those who survived the landings were shredded by machine gun fire from fortified concrete bunkers. Artillery from naval ships rained onto the beach indiscriminately killing both friendly forces and the enemy. More so than even Dante’s Inferno, the Capa photos are the visual depiction of hell.

In point of fact, Robert Capa’s D-Day photos changed the world to a similar degree the invasion itself did.

Along with photos of the Apollo Moon Landings and the funeral of John F. Kennedy, the Capa D-Day photos are the most famous photos in history. As media evolved into the video and then internet age the relevance and impact of still photos waned. People were hard to shock with a single image. Our brains became trained to interpret visual information differently, cameras became more common and higher quality, the transmission of images became instantaneous and every person with a smartphone became a reporter. But even with this evolution and proliferation of media Capa’s D-Day photos still stab with a sense of horror and violence.

Capa shot the D-Day images using two Contax II cameras both fitted with 50mm lenses. He carried redundant equipment in case one camera malfunctioned or was destroyed in battle. Capa shot 35mm film negatives. He carried additional rolls of film with him, but changing the film without accidentally exposing it and keeping it dry was nearly impossible on D-Day.

Although Capa shot a total of 106 frames before, during and after the landing of the second invasion wave he accompanied, most were destroyed by a fifteen-year-old lab assistant named Dennis Banks working for Life magazine in London. Banks accidentally set a film negative dryer too high and melted three complete rolls of film. In a bizarre allegory, it is as though those lost images symbolize the soldiers lost on Omaha Beach that day. Even Capa’s ruined images remain significant. 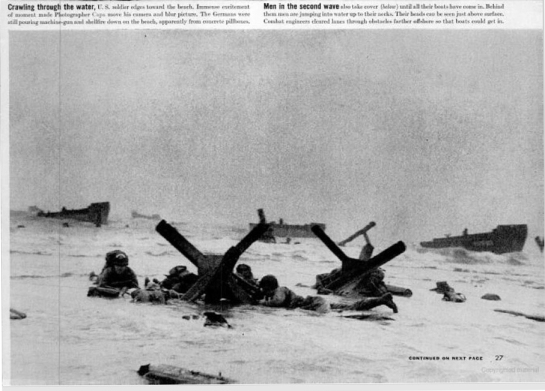 Only 11 total photos by Robert Capa of the D-Day invasion survived the darkroom error. Capa never mentioned the loss of the images. He took the matter completely in stride, the horrors and loss of battle having hardened him.

Life magazine published ten of the eleven photos on June 19, 1944. The feature was a splash-photo spread with short captions that were partly inaccurate. The captions didn’t matter. Capa’s photos told the story of the horror of D-Day most effectively without words. The images live on, almost more impactful now in retrospect than in the month following the D-Day landings.

On May 25, 1954 Robert Capa was killed when he stepped on a landmine while reporting on the French involvement in what went on to become the Vietnam War. Two journalists accompanying him, Jim Lucas and John Mecklin also from Life magazine, reported that Capa held his camera even as he was evacuated to a forward area field hospital, where he died from his wounds at the age of 41.

Author Tom Demerly is a U.S. correspondent for TheAviationist.com, the foremost military aviation blog in the world. He is a former U.S. Army Long Range Surveillance Team member and has visited all seven continents. He has written for TACAIRNET, Outside, Business Insider, Velo-News, Bicycle Guide, Bicycling, Inside Triathlon, Triathlete, Triathlon Today!, USA Triathlon Magazine and many other publications around the world.