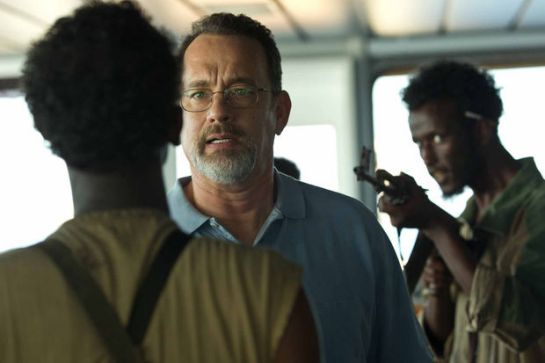 Captains Philips is tense and dramatic, with a sense of pacing and realism that holds you hostage.

Director Paul Greengrass has married the elements of realism, drama and film style to build a depiction of the 2009 pirate seizure of the U.S. flagged container ship Maersk Alabama off the East African coast that resulted in a high seas hostage crisis with its Captain, Richard Philips.

From the terse, abrupt opening pace that makes brilliant use of not showing Tom Hanks’ entire face as Captain Philips in any of the first scenes to the nervous dialogue, Greengrass speaks to the detachment and fear of America toward the boiling tensions of West Africa. The discussion of fears about terrorism and piracy are vague, nearly absent, like our own awareness and detachment from things that only happen “over there”.

Another masterful depiction is the Somali pirate camp and the pirates themselves.  Somali Barkhad Abdi is frighteningly authentic in the role of Muse, the lead pirate. He should be. Abdi is a Somali from Mogadishu who immigrated to the U.S. after being smuggled out of Somalia. He attended the University of Minnesota and answered an open casting call for Captain Philips that landed him and three of his friend roles as the pirates.

The scenes in Somalia are shot in a grainy sepia with shaky camera movements that suggest chaos and unrest. Pan back to the U.S. scenes shot in serenity and with a steady cam and you have a rich visual contrast. These visual elements play over a soundtrack that is large, dark and ominous. The strong score looms in the background then rises to build tension in key scenes. It is a subtle but effective use of the musical score.

Scenes of the pirate takedown of the Maersk Alabama are authentic and rife with real-world action. The supporting cast of the Maersk’s crew holds up the story with a more than adequate depiction of the tension during the boarding and their impressive mastery of the situation during the standoff. Pacing here is snappy and never gets bogged down. 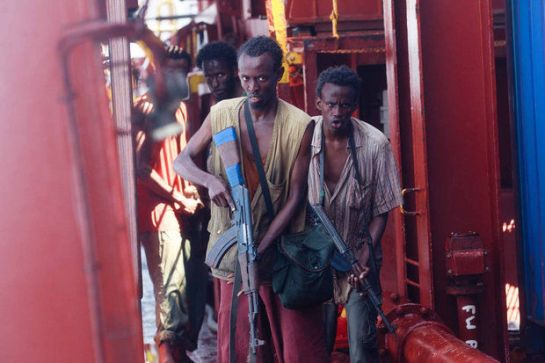 Barkhad Abdi is authentic in the role of the lead pirate. He should be, he is a Somali ex-pat who studied in the U.S.

The film transitions heavily once Captain Philips is taken hostage on the ship’s ocean going lifeboat. The desperation and hopelessness begins to erode the composure of everyone crammed into the little vessel. The open ocean scenes must have had significant cooperation from the U.S. Navy, especially when the U.S.S. Bainbridge and the U.S.S. Halyburton arrive on station. Few scenes are as inspiring as a U.S. Arleigh Burke class destroyer cutting a fast turn toward harm’s way.

The movie changes briskly to U.S. Navy SEALs parachuting into the ocean to board the Bainbridge and supervise the negotiation for the release of Capt Philips. Again, the depiction has a documentary feel to it and the action is tense and quick. A keen trick of the filmmaking was to build the pace consistently until the climax happens with a shock like quality that adds realism to an already eyewitness experience. It’s over before you know it. 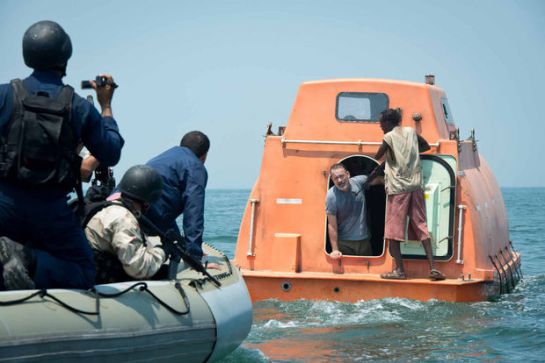 The film ramps up the tension as Captain Philips is trapped aboard the lifeboat with the Somalis.

Greengrass and Hanks save the best for last as the closing scene is a masterwork of acting by Tom Hanks. His depiction of Captain Philips back on the ship is so real it is disturbing to see.

Captain Philips is a great film and a very capable record of the events as reported in the Maersk Alabama piracy. We get an interesting look at the Naval Special Warfare sniper control system and what feels like an accurate depiction of the incident. It’s also good film craft made stronger by Tom Hanks’ typically great acting. In this role as Philips he is at his best ever. Add to this the authenticity of the Somali characters and the movie combines tense drama with documentary realism into a great film that is absolutely more than worthy of seeing.