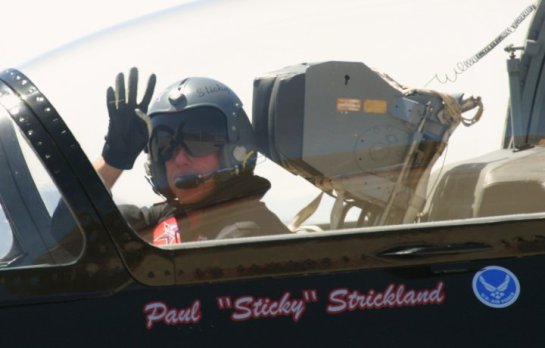 The sequester federal budgetary cutbacks have grounded the big military flight demonstration teams for 2013 and the airshow industry built around them. It may last a year, it may be longer.

Despite the sequester coming during a decidedly left-leaning administration the solution may be decidedly right-leaning capitalist in origin. The privatization of airshows is happening. If the big military jet teams stay grounded it is possible commercial enterprise may take their place.

In 2003 beverage brand Red Bull began the Red Bull Air Race Series. Harkening back to the 1930’s with the Thompson Trophy air races, the Gee Bee Racer and soon-to-be war hero Jimmy Doolittle, the Red Bull Air Race Series was a marketing and extreme sports coup. Red Bull Air Racing combined the daring and spectacle of classic piston-driven air racing with competition aerobatics in an urban, waterfront setting. To bring it into the 21st century it featured interactive coverage and point of view cameras. It also had the primary staple of mass-appeal events: the potential for bloody disaster. Aerial collisions with collapsible racecourse pylons were common. At least one aircraft even hit the water and narrowly escaped. 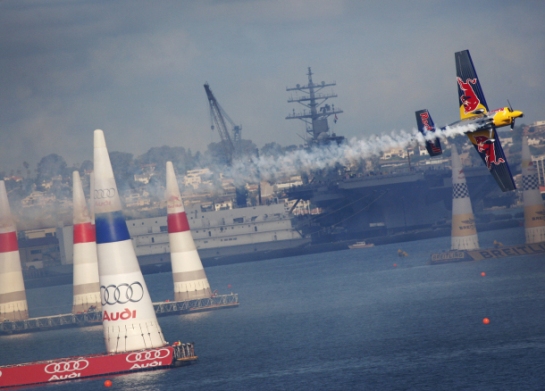 This writer was a guest at three Red Bull Air Races before the series was cancelled in 2011. At the Red Bull Air Race San Diego in 2009 I had access to the opulent Red Bull Flight Club box seat area. Darling hostesses in short skirted, 1950’s stewardess uniforms with pillbox hats brought round after round of Red Bull drinks to your table at the best viewing area on the course. White uniformed chefs served an all day banquet. We enjoyed a huge, private television monitor with live cockpit cameras and instant race timing, placings and commentary. It occurred to me that if an aircraft missed the turn after the far pylon near the San Diego Bridge, we would be dead. Only a few hundred feet separated our VIP seating area from the active racecourse, with no barriers. It harkened back to the spectacle of the Roman coliseum, with the pilots risking their lives for the entertainment of the crowds lining the shore like modern, aerial gladiators.

But the spectacle I enjoyed at the Red Bull Air Races in the Flight Club wasn’t free. Paid admission to the coveted Flight Club was over $300 per person. Spectators around the course viewed the event free, but Red Bull, through its financial sponsorship of the event and, to a smaller degree, through ticket sales of premium viewing areas, created a model for monetizing the private airshow. While large military airshows do generally sell a premium viewing spot with a chair and a good view, the paid viewership usually benefits a local charity, it isn’t a commercial enterprise, and usually isn’t $300+ a seat.

While the Red Bull Air Races and the big military jet teams are gone for now some private flight demonstration teams have surfaced. The Patriots are a private jet team from Byron, California. The team fields six Czechoslovakian built Aero L-39 Albatross single engine jet trainers. While the L-39’s don’t rattle your insides like the afterburner equipped F-16’s of the Thunderbirds or the twin-engined FA-18’s of the Blue Angels they do include former Thunderbird, Blue Angel and Canadian Snowbird jet team pilots and perform some impressive close formation aerobatics. 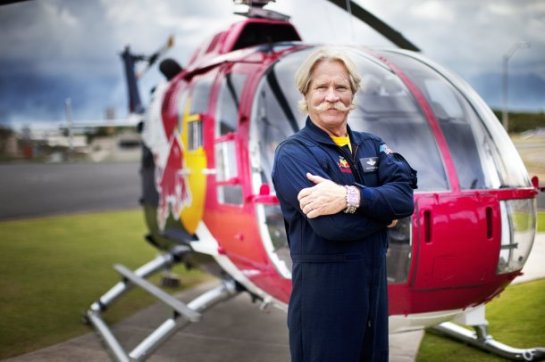 Red Bull, following the cancellation of the Air Races in 2012 and ’13, have sponsored impressive U.S. airshow acts including their unique aerobatic Messerschmitt MBB-105 helicopter flown by pilot Chuck Aaron, the only U.S. helicopter pilot licensed to do aerobatics in a rotary wing aircraft. Aaron’s loops, rolls and hammerhead turns in the Red Bull MBB-105 helicopter are an incredible spectacle that challenges traditional notions of helicopter performance. His aerobatics are reminiscent of the great Bob Hoover who performed a flight demonstration routine in the Rockwell Aero Commander twin-engine civilian light aircraft. Many of Hoover’s performances in the privately sponsored Aero Commander were as unusual at the time as Chuck Aaron’s are now in the Red Bull helicopter. Both pilots have challenged ideas of what was possible in a conventional aircraft type. 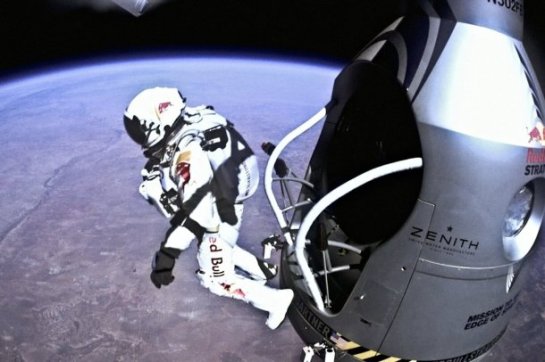 In 2012 Red Bull scored another commercial aerospace and media coup when Red Bull athlete and extreme skydiver Felix Baumgartner set a new free fall parachute record and became the first person in history to break the sound barrier in free fall without a vehicle. The Red Bull Stratos project was entirely privately funded. Even the broadcast was privately produced and shown on the video share website YouTube. The live broadcast of Baumgartner’s record-breaking jump had over 8 million live viewers, a record for YouTube. Since then Baumgartner has been honored with numerous aeronautical achievement awards and was nominated as Time magazine “Person of the Year”.