One of our remote, night vision game cameras in our yard captured an interesting level of détente that has been going on for some time between a cat who visits our yard regularly and one of the opossums who lives in our yard.

Opossums are docile, benevolent animals especially in a suburban setting. They are well known for eating disease carrying ticks and their low body temperature means it is almost impossible for them to contract diseases like rabies or other animal-borne pathogens. Opossums help keep communities clean and disease free by eating ticks that can carry lyme disease. Having opossums in your yard means your local ecosystem is safe, clean and disease-free.

We were very excited when we found a small family of three opossums living in our yard, and have done everything we can to support them. We were also concerned that the local domestic and feral cat population, who we also support with four outdoor cat houses, might not interact well with our opossums.

Any concern about the two not getting along has been put to rest by what we’ve seen over the past few months. This video shows one of our opossums and a cat who frequents our houses eating side-by-side and getting along just fine.

The cat in this video is likely a local feral who appeared about eight weeks ago. He visits us several times a day and uses our yard as a hub for his daily patrols. As our regular feral cat, he has struck up a good friendship with our opossums.

Author Tom Demerly writes for publications around the world and really likes animals.

Out the back window in a pool of light at 12:34 AM. He was interested in what was inside our window. When he looked inside our house he saw two happy, healthy, well-fed cats with rooms full of toys and cat trees and water fountains and beds. He had a sad look of longing on his face.

And then he was gone.

It was March 13 that first time we saw him. Since then he has come back many times. Sometimes he just shows up. He comes running when he sees us. Now he answers to our voice when he is around or meows outside the window to come in.

We started calling him “Mr. X”, a man with no name, no obvious place of belonging.

When Mr. X arrived the first time I was concerned. Animals show emotion on their face. After decades of living with cats I could tell Mr. X was not happy outside our house that night. He wanted a warm blanket, a cat tree, something to eat and a friend. 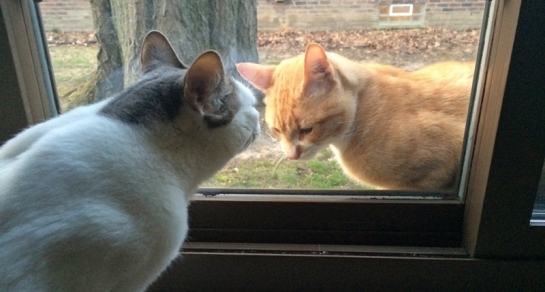 We kept an eye out for him and over time he would make his way back for another visit. Then another. Finally, one day, we invited him into the back porch. It’s segregated from our two cats (inside only cats with clean health records). He was incredibly affectionate, loved to be petted, then held, then brushed. He smiled a big cat smile and purred when we gave him his own blanket. Then we bought him a water dish, a food bowl, his own litter box, a heated bed, all on his own glassed-in patio.

We wondered where he was from. Was he someone else’s cat? Did a family move away and abandon him? There were five houses for sale on our block- he could have been from one of them- a family moved out and left him behind.

We had a special collar with our phone number made and we planned to put the bright red collar with our contact number on him so if anyone owned him they could call us when he got home. Domestic cats have relatively small territories, males larger than females, but finite territories nonetheless.

Mr. X happily accepted the collar and went on his way. We hoped we’d find an answer to the mystery of Mr. X soon.

Success. Mr. X had a home, and a name. His name is “Chester”. We don’t know his last name. 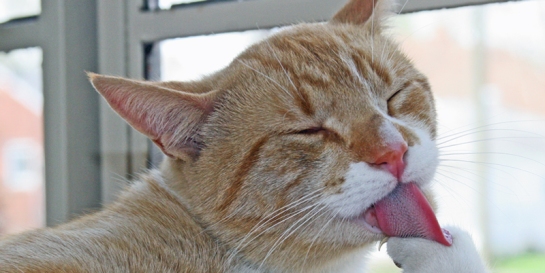 As it turns out Mr. Chester lives next door. He comes and goes as he pleases. The people who own him have children who love him and take good care of him. His excellent disposition speaks to their kind treatment of him. But the person who texted me told us her husband is allergic to cats and they were looking to relocate him.

Of course, Mr. Chester has a vote in all this.

Over the next few days Chester made it clear he loves us and enjoys good food, a heated bed and a wide open back porch to lay in while the sun spills through the window during the day. 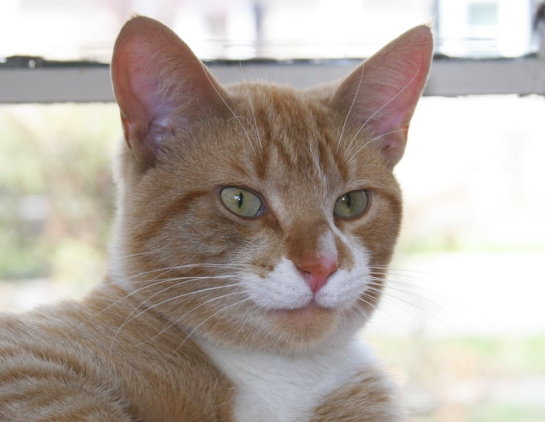 But Mr. Chester also loves his freedom. He wakes up from his daytime naps and wanders out of the back porch at night. He plays in the yard, running around me, playing fetch, getting petted and stalking imaginary things.

We’ll see him in the window next door. Then outside. Then back in our porch. Our cats haven’t met him except through the window and screen and by sharing scents on the back porch after he leaves. Mr. Chester needs a clean veterinarian exam before he integrates with our cats because of disease that can be transmitted from cat to cat.

But there is more: As it turns out the man next door isn’t the only one allergic to cats though. Jan Mack is also allergic, and she takes a coal shovel full of prescriptions every day to moderate her allergies to our two cats, MiMi and Vice-Admiral Malcom Fredrick Davis III. So the full integration of Mr. Chester into our home may never be possible for three reasons; Jan is allergic, and a third cat may add to the symptoms, Mr. Chester may not want to live inside permanently, and outside cats can put inside cats at risk for transmitted disease. Lastly, MiMi and the Vice-Admiral may not want a new cat. They are curious about Mr. Chester’s visits, but reserved about him being a permanent resident.

So, as it turns out, Mr. Chester is the decider in this matter. If he decides he wants to move from next door to our house, he is welcome as long as we can moderate the issues of Jan’s allergies and integrate him with MiMi and the Vice-Admiral. But those factors also weigh heavily on the matter.

For now, Mr. Chester is enjoying the benefits of two households and seems quite pleased about it. A veterinarian visit is in his future, and we worry about his exposure to traffic and other animals outside, but he appears to be a clever man who has made his way so far. 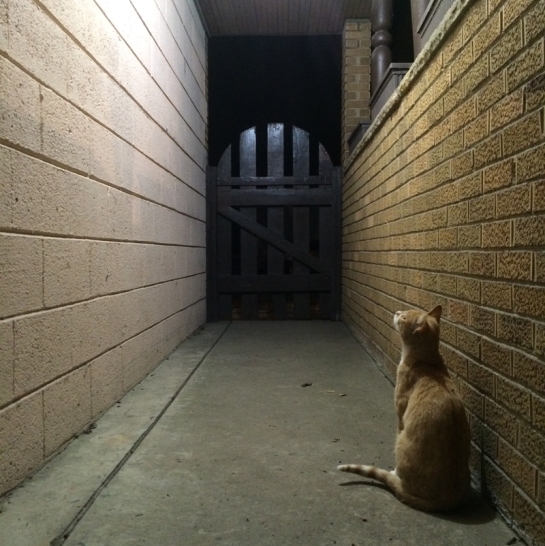