The beautiful new Boeing 787-8 arriving at Detroit Metro for the first time ever on December 1, 2014 as Royal Jordanian flight 267.

The first ever Boeing 787 Dreamliner to land at Detroit Metropolitan Airport arrived this morning, December 1, 2014, Monday. Catching a rare first arrival is a big trophy for aircraft spotters.

A month before the arrival of the aircraft, a beautiful, brand new Royal Jordanian Airlines Boeing 787-8 Dreamliner, the Facebook page Detroit Metro Airport Spotting posted an announcement of the first-ever arrival and invited people who “Like” their page to the event. Aircraft spotting is a worldwide hobby among aircraft enthusiasts and bagging a first-ever flight is a rare trophy.

Trying to be in the right place at the right time to catch an arriving flight is a little tricky, but much easier now with the help of flight tracking websites like FlightAware.com and networks of people with like interests on social media.

The Dreamliner’s route from Amman, Jordan over the Atlantic to Montreal, Quebec, Canada before flying here to Detroit.

The Dreamliner arrival originated in Amman, Jordan almost two days earlier and flew in a northern arc across the Atlantic, descending down over northern Canada and into Toronto. It originated as Royal Jordanian Flight 267 out of Amman, continuing from Toronto to Detroit with the same flight number.

The Boeing 787 Dreamliner is a milestone in aviation because of its incredible fuel efficiency, over 20% more fuel efficient than similarly sized passenger aircraft. The 787 competes directly with the mostly French-built Airbus A350, and the A350 is said to be even more fuel efficient. From the start the Dreamliner was meant to be revolutionary. Most of the aircraft’s wings are made of carbon fiber, not aluminum. This makes them lighter and stronger, contributing to fuel efficiency. It also gives the Dreamliner its unique upward bowing of the wings in flight, like a giant, gliding bird.

The carbon fiber wings of the Boeing 787 Dreamliner form a graceful curve in flight. Here is the Royal Jordanian flight on final into Detroit on its first-ever arrival here.

The windows on the Dreamliner use a unique passenger controlled auto-tint feature as opposed to conventional pull-down blinds. Early Dreamliner prototypes had unusual, triangular shaped windows, reminiscent of the DeHavilland Comet. The production versions settled on a squarish, advanced passenger window that is about 30 percent larger than other aircraft in its class. Probably better that Boeing went to the more conventional square windows since the triangular windows that originated with the Comet airliner in 1949 were blamed for several crashes and later changed.

To get photos of the Dreamliner’s arrival I went to the south end of Metro Airport. After driving around the airport and watching flight arrival and departure patterns it was easy to predict which runway the aircraft would likely be arriving on. Early traffic of “heavies”, Bowing 747’s, were arriving on the western runway at Metro, runway 4L as approached from the south. The Dreamliner arrived on runway 3L. Usually the very large aircraft like 747’s are routed onto their own runway while the smaller aircraft use a different runway on busy arrival days.

A big Delta Boeing 747 arrives at Metro before the Dreamliner. This aircraft used the farthest west runway, runway 4L as approached from the south.

Security around all airports has to be tight. One Tom Clancy novel featured an attack on an airliner using a shoulder-fired surface to air missile at Tucson International airport. In Clancy’s story, the weapon was smuggled across the Mexican border by Middle Eastern terrorists. When I showed up to the south end of Metro Airport wearing a backpack and walking toward the airport fence, three security vehicles and one Wayne County Sheriff converged to stop me. After a quick and courteous ID check by these excellent security officers they let me wait a few moments for the aircraft’s arrival while they stayed with me. 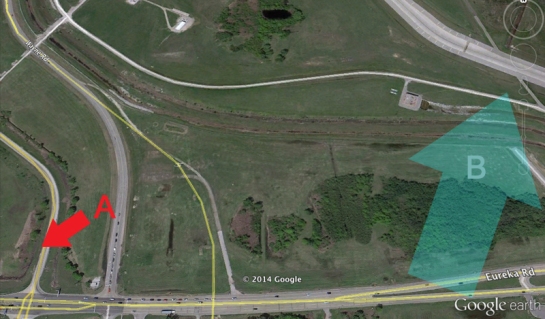 A. Where I was located to shoot photos between the approaches for runways 4L and 4R. B. The arrival path of the Dreamliner.

The ideal location to shoot photos of the Dreamliner would have been with the sun behind me. It was an overcast day so the lighting would be marginal. As luck had it, the aircraft was between the sun and me, backlit. Combined with the overcast skies conditions for photography were poor. But plane spotting is a lot like fishing. Sometimes you hit the jackpot, sometimes conditions are just OK. Today was a “just OK” day for photography.

The Dreamliner on final with flaps in the landing position and gear down. The crummy light conditions didn’t do the nice paint scheme any favors.

About three hours later the Dreamliner was set for departure and I went back hoping for better light. At the north end of Metro Airport I waited in the hotel/rental car parking lot across I-94 for it to take off. About an hour later than we had thought the aircraft was back in the air, this time with a little better lighting.